I told my family I was going to make Garbage Bars for desert. My lovely daughter, Grace, protested. 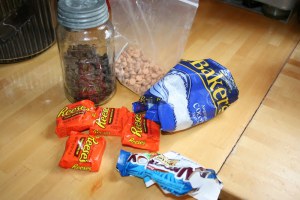 But,  I thought my name more aptly described the leftovers in opened bags that had somehow eluded nibbling, craving, snitching fingers in my pantry.

Oh, and I can’t forget the best kind of fingers in the pantry, the baking fingers.

Jon used the most of the chocolate chips for cookies, Grace used the coconut to make German sweet chocolate cake, and the butterscotch chips were so old I don’t remember what the rest were used for. Don’t worry, though, those waxy things are so close to plastic they can stay in your freezer forever and not change forms.

But, those snitching fingers can leave only enough of something  so that it’s  good for nothing.

Speaking of snitching fingers, when all of my Mom’s six kids moved out of the house, she was mystified that her chocolate chips still disappeared.

Dad, you are so busted! 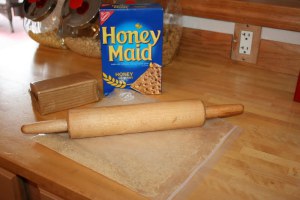 Back to using the leftover garbage in my pantry.

Preheat oven to 350 degrees. Smash the package of graham crackers into crumbs.

Melt butter in a 9×12 pan, watch carefully,  it burns easily, and who can afford to throw out a whole stick of butter?  OK, I only had to  do that once, the last time I made the bars.

With a fork, mix in the graham crackers crumbs, lightly patting them down.

I don’t have a picture, but I think you can figure out the next step. Open the sweetened condensed milk and drizzle it all over the crumb crust. Don’t go all the way to the edge, it becomes like caramel when you bake it, and you’ll never get the bars out of the pan.

Take your opened bags of garbage ingredients and sprinkle them evenly on top. There wasn’t enough of anything to use in any other recipe. I had to make the ancestral mantra Waste Not Want Not come alive again.
The real recipe is basically two cups of chips and whatever else you want. I use 1 cup semi-sweet or milk chocolate and 1 cup of butterscotch, vanilla, or peanut butter chips.

You can use one cup of  nuts, but I never do. Nuts are for squirrels.

I have used little caramel bits, toffee bits, and this time I cut up extra candy bars into little pieces. Oh, except for the half of the Almond Joy.

Rebekah Joy ended up eating that. 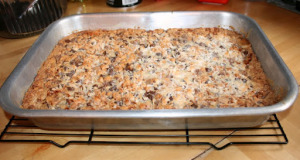 Bake at 350 for about 25 minutes. The edges need to be golden and the middle can’t be soupy. 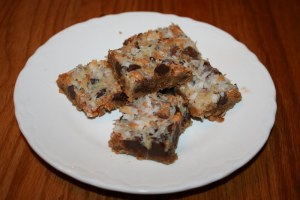 I always cut off the edges and let the kids nibble on them, then cut the rest into smaller squares because they’re pretty sweet.

To save time, I’ve even been known to make and freeze the crumbs and keep them on hand in case I need a quick desert.

Ya’ know what I love the most about this recipe? You don’t really have to follow it. You take whatever you have, put it in the heat, and melt it into deliciousness.

It makes me think about
our gifts,
our desires,
our ambitions,
our talents,

Today’s Christianity may tell you about the degrees you need, the experience you need, the vast talent you need to serve the Lord. Most of us moms can’t remember to comb our hair in a day or how we were going to end our sentence.

What do we have to offer Him?

Whatever opened items we have.

An open mouth, unashamed of the Gospel.

What do you have?

Don’t let the enemy get his snitching fingers in there, and make you think that you have so little of something that you’re good for nothing.

Mix your open ingredients and apply the heat of the Father’s love. He will prepare something amazing.

It won’t be garbage.