Billboards and signs along the Interstate can preach a mighty message.
The person paying for the advertising wants results.
They want you to buy the right product,
participate in the right activity,
or show the right moral character.
Advertisers know well how to appeal to the thoughts, beliefs and priorities of a region.
We saw various signs along our journeys this summer. 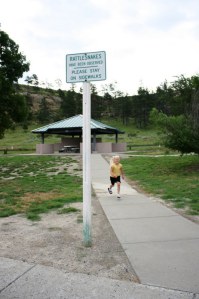 The Montana Department of Transportation had a serious message
for my carefree Beka Boo. 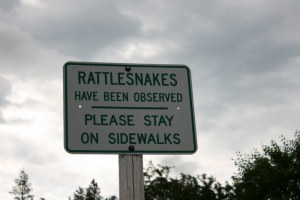 Not raised in Montana, she isn’t aware of the danger of rattlesnakes
who love to sun themselves on rocky hillsides.
She doesn’t know how to look for the diamond pattern
or listen for the baby rattle noise.
So, the DOT was diligent in warning of the danger. 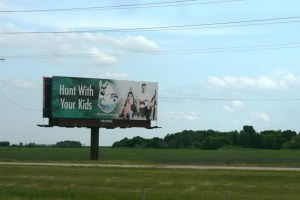 The North Dakota Game and Fish Department is killing two birds
with one stone, or one rifle, I guess it would be.
Build family togetherness and ensure safe hunting practices by
hunting together as a family.
As one who grew up on venison, grouse, an occasional moose or elk,
I can tell you, it also saves on the family budget. 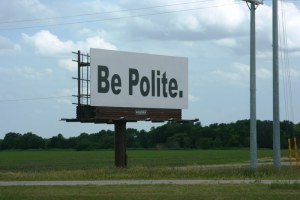 Yea, who needs to argue this agenda? 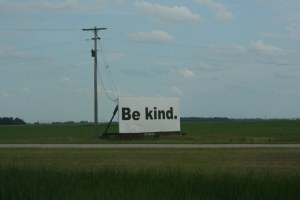 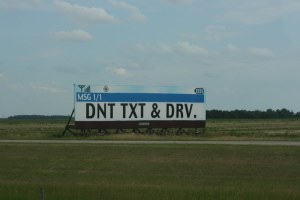 For those of you who have almost been hit by a texting freak,
can I hear an AMEN?!?!?!?! 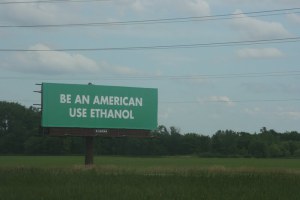 The North Dakota Ethanol Council proudly proclaims on their website~
“Ethanol—North Dakota’s homegrown alternative to foreign oil.”
(You haven’t heart about E-85?)
Who wouldn’t want to cut ties with overseas oil producers?
Plus, ethanol creates industry for the state.
Remember seeing in the newspapers that people were moving
to North Dakota when the recession hit?
ND had jobs.
ND had no debt.
People shouldtake advice from  ND billboards, I think.
Anyhoo….. 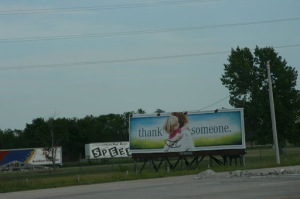 Thankfulness is always a character trait we can promote. 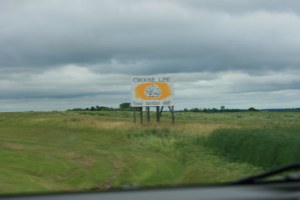 Yes, even thought-provoking messages about controversial subjects
can speak to hearts in a few seconds when  you drive by.
The Lord has used signs to speak to us since the foundation of the world.
In the Genesis Creation account, he calls the sun and moon
“signs” for the seasons, days and years.
Yep, they tell us when it’s morning and when it’s night.
That’s an easy one.
A sign to remind.
The Lord gave Moses “signs” to prove to the people he was chosen
to lead the children of Israel out of bondage.
A sign to reaffirm.
In I Samuel, signs were given to Saul after his anointing as king
prove the Lord’s presence in his new role.
A sign to reign.
In the age of grace,
the Lord Jesus rebukes those who always have needed
“signs.”
He asks us to walk by faith and not by sight.
It was distressing to Him that some people came only to
watch the miracle,
and not
experience the miracle
of the new birth.
John 4:48
Then Jesus said to him,
“Unless you people see signs and wonders,
you will by no means believe.”
Signs were often given to weak people
who wouldn’t trust the Lord at His Word,
but the Lord still wanted results.
We shouldn’t be people who need signs.
We should read the Scriptures and obey without further affirmation.
Can we just believe Him at His Word?
When we respond to His offer of salvation,
in faith and not sight,
we become the billboard.
A Sign of Redemption.
Share
Pin
Tweet
Email
Print