A kid’s belief comes in handy to bribe good behavior. The Elf on a Shelf has increased the threat  of the Naughty and Nice Lists. But nothing good comes from men who believe in Elves. 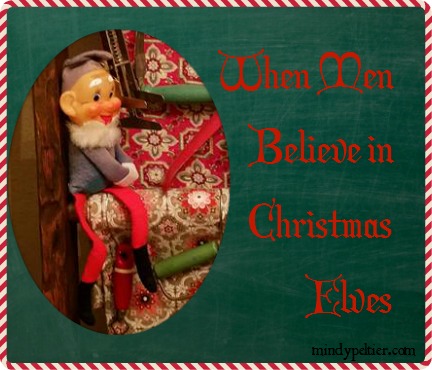 How do you know if men believe in Elves? They don’t buy their wives presents or take their kids shopping to buy presents for Mommy. They don’t help frost cookies or decorate the house. The entire holiday season comes from the hands of the woman who picks everyone’s underwear off the floor.

These are not bad men. These are not men who are thoughtless all year. They’re just misguided men who think Christmas magically happens.

This isn’t a bash-our-husbands kinda’ blog, more of a truth-telling blog. Husbands are kinda’ adorable and often useful. There are reasons we married them, reasons we might not remember in moments like when I caught Mr. P cutting carpeting with my Ginghers. Oh, yes he did. The daily annoyances like underwear on the floor and garbage cans left on the boulevard until it’s almost time for the garbage men to come back can be overlooked more easily than the false belief in Christmas Elves.

But women can enable this belief.

THERE ARE CHRISTMAS MARTYRS

Christmas Martyrs  buy their own presents and stuff their own stocking. They bake everyone’s favorite cookies. They silently march through the holidays as a Martha Stewart wannabes and dissolve in disappointment later.

Martyrs usually haven’t had honest conversations about what holiday traditions they want in their own households.

Maybe they’ve been critical. Cookies don’t have to be perfect. If a man makes a mistake like confusing baking powder for powdered sugar, as my brother Lee did, they’ll only do it once. And it will be funny.

Being ungrateful also keeps men from Christmas spirit. Be thankful for help and use the presents they buy.

This isn’t about blame, it’s about changing behaviors in both the husband and wife.

HOW MR.P LEARNED THERE ARE NO ELVES

Once upon a time Mr. and Mrs. P were a very happily married newlywed company.  Mrs. P didn’t tell Mr. P there were no elves, so she made most of the Christmas magic happen. There were no presents for her, so she bought her own. She filled her own stocking. She baked alone. She waited until the house was filled with adorable Little Ps before she finally decided to break the news.

Mrs. P gently informed Mr. P there were no Christmas elves and that he would have to buy her presents, stuff her stocking, and take the kids shopping. Mr. P didn’t believe her. He grew up with amazing Christmases and believed magic Christmas Elves made it happen.

Mrs. P held her ground and didn’t buy herself anything. No Jing Tinglers or Who Hoovers, no Gar Ginkers or Blum Bloopers.

The Ps drove to Montana with the back end of the Suburban filled with presents.  Mr. P grinned as he handed present after present to his children to pile beneath the Charlie Brown Christmas Tree Grandma and Grandpa had cut down in the woods.

There wasn’t one present for Mrs. P. Not even a tiny one.

Mr. P said, “Why didn’t anyone buy Mom a present?”

Mrs. P held her breath, knowing her very sweet and other-wise wonderful husband was about to learn the truth about Christmas Magic. He would have to stop Believing in Elves.

“Oh.” Mr. P finished unpacking the car silently. He puzzled and puzzled ’til his puzzler was sore. “Come on kids, put your coats on. We’re going shopping.”

The game-changer wasn’t about getting presents. It was about us learning as a couple to create Christmas magic together.

Women, it’s time to break it to the Elf-Believing men in your lives.

If you’re a man reading this, or your wife is reading this to you,  I’ll break it to you gently.

THERE ARE NO CHRISTMAS ELVES.

They’re a figment of Santa’s imagination. If your wife is going to have Christmas presents under the tree you and those tiny humans running around the house calling you Dad HAVE TO BUY THEM.

You are the ELF.

Time to get off the shelf.

It doesn’t hurt to become an Elf yourself. You don’t have of wear pointy felt shoes, a jinglebell hat, and striped tights, unless you want to. It happens the moment you begin to make magic in the lives of people around you.

It’s not about the presents, that’s a small part. Yes, wives love presents, but they love doing things with their husbands more. Nothing feels better than happy family creating memories.

A woman loves to see a man in the kitchen, even if his cookies are lopsided.

A woman loves to see a man taping his finger to the package while trying to make those expert corners his wife makes.

A woman loves to see a man holding his child’s hand as they walk through the store together.

Because being an Elf is being the man your wife married ALL year around and not grinching out of Christmas festivities.

Yes, Virginia, there is a Santa Clause. But, don’t let your man believe in Christmas Elves.