Montana is truly the place where deer and antelope play. 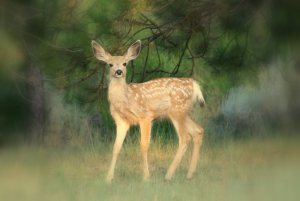 I spotted this little beauty on the small mountain behind my parents’ lake cabin. There were two mommies with fawns and several other adult deer in a small herd. They love to come down to the cabins and eat all the flowers, shrubs, trees and vegetable gardens.
Even though I have seen deer my entire life, they still thrill me.
My mother, too.
She is noted for exclaiming nearly every time we  drove to town in the past five decades, “Oh, look! There’s some deer!”

I think she is saying, “But, MAAAAAAMMM I really have to go.” So cute how her front legs are crossed. Just like a toddler. 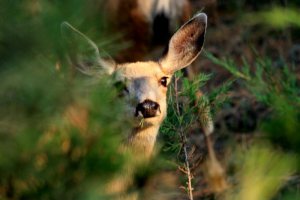 You can walk up very closely to these deer because they know it is not hunting season. I was using a 70-300 zoom lens, but still was very close. Close enough to see grass hanging out of her mouth. 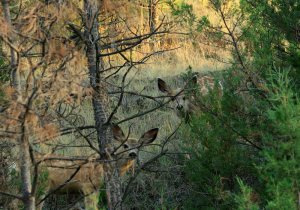 I spooked the fawns a little so they walked up a trail. I followed them. We had a stare-out for quite awhile. I would like to put one of these little things up against a cat. Not sure who would win. They were making these adorable meeps like a squeaky toy would, communicating to their mommies.
They were so nimble, quickly prancing out of my way. They almost bounce. I always thought cartoons were exaggerating animal behavior. They aren’t. They really, really, really, look like they are bouncing.
Their nimble hooves scrambling over lichen-etched rocks, prickly pear cactus, shrubby weeds and fallen trees picture how we can react to trials with strength from the Lord.

During our struggles and trials do we feel like these fawns dancing on the mountainside?
We could.
We should.
The Lord can give us this strength and ability. 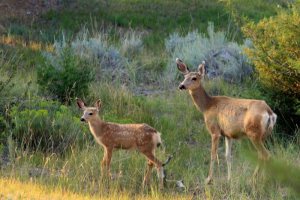 The fawns were reunited after slipping away from me on a lower trail, then we all walked back down into lower ground.
I stood crouched behind a bush waiting for perfect shots. My son rode by on his bike. With a whispery yell he kept calling, “Mom! ….Mom!….There they are!”
When my silence didn’t send him on his way, his ‘whispers’ sent the deer to the next yard.
I calmly asked him, “Why do you think I am crouched near this bush with my camera aimed at the deer?”
“Oh.” 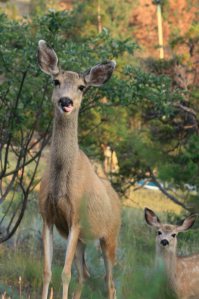 Bad Mommy! Sticking out your tongue like that. They really do speak human. I think she is telling me she is hungry.
Dogs sniff and lick you to decide if they want your presence. A deer will stare you down. If they don’t feel threatened, they will then ignore you.
For a few minutes we were engaged in a sort of a duel. I was about 15 feet away and had my lens aimed at her face. She tilted her head sideways to the right. My lens followed. She brought it back up. She titled to the right. Back up. Tilted to the right. Back up. She brought her head down forward, eyes still locked on me. Brought it back up. Brought it down. Brought it back up. I followed each movement with the precision of synchronized swimmer who’s trying to get back into the routine.
I won her trust. She turned her back on me and the fawn was perusing some jet skis on a trailer while I moved closer and closer. 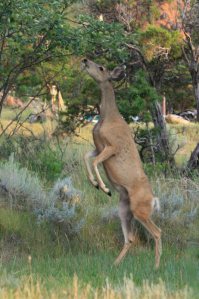 Confidence gained, she began to steal apples from the neighbor’s tree. I couldn’t decide if it is breaking the law to steal if you are a deer. It brought back a huge flashback of guilt from all the times my siblings and I used to steal crab apples from our next-door-neighbor’s tree.
She started chomping, and I could hear and see those little sour green things in her mouth. It almost made me drool. They were pure green! We wouldn’t have ever have stolen apples that green…..
…..without Mom’s saltshaker in hand. 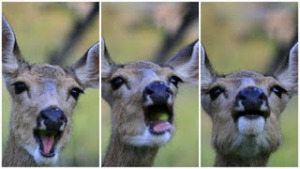 I even heard her swallow. She just pigged out. I wonder if she’ll get a tummy ache. Maybe she’ll get worms. Or maybe she’ll have a guilty conscience the rest of her life like I have. So sorry Mr. Beaver! 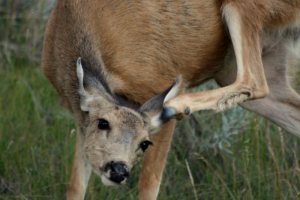 After her meal, she finished off with a good scratch.
I shot deer out of season until my camera battery died. Then, I ran back to the house, got my Flip and began filming. When that died, I had my Nikon in my pocket and shot more footage. When my arms were tired and the deer were tired of me, I walked back to the cabin.
I was thrilled for the opportunity. I love God’s creation, His created beings and how being around all these things remind me of the Creator. I marveled that I had been so close to a fawn I had only previously seen up close in Bambi.
Sunday afternoon, coming home from the church we visit in Helena, I saw a deer nibbling grass right next to the road about a mile from the turnoff to the cabin. We slowed, as I always have my camera in hand. I wondered why the deer would be so close to the road and wouldn’t move when our vehicle approached.
Then, I saw brilliant white spots on the ground in the midst of the brown weeds. They were not moving. I didn’t hear any of the adorable baby-fawn squeaks. And, her Mommy was not wanting to leave her fawn.
This morning my mom was enjoying her coffee, toast and view from a lawn chair on a rise above the cabin. She spotted two deer and only one fawn.
She brought me the sad news and we knew I had recorded that fawn’s last day of playing.
I seldom have heard such a discouraging word.
Share
Pin
Tweet
Email
Print