I’m not a football fan.  A  Midwest transplant to the  Seattle area, I gradually acclimated to the rains, but not the Seahawks. They never sparked my interest.

It wasn’t the Super Bowl Win! that changed my mind.

I saw it everywhere and assumed it was a favorite player’s number. Ya’ know, some guy who made millions of dollars for running past the line at the end of the field while still clutching the football in his hands?

I never heard a name associated with the #12, 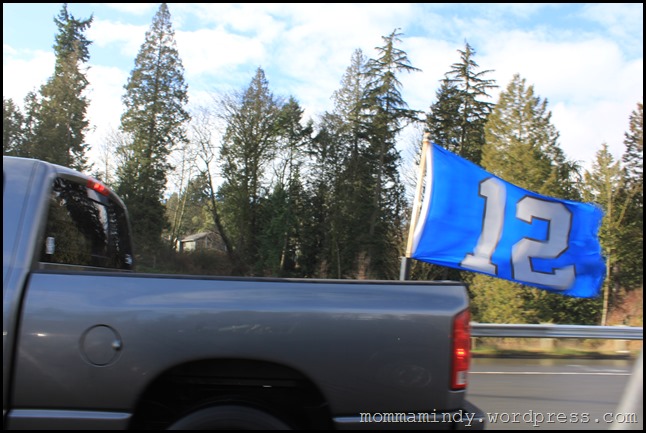 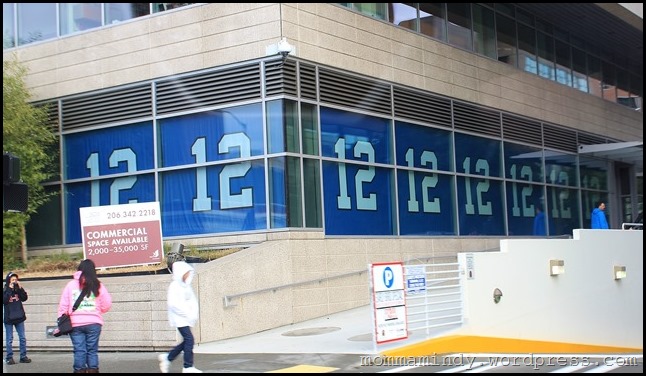 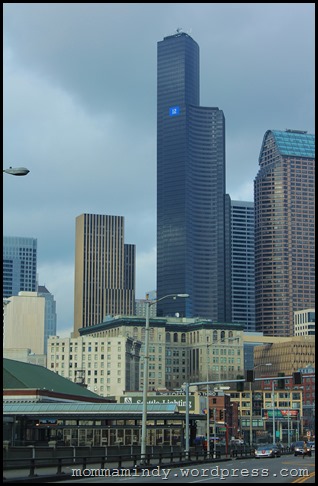 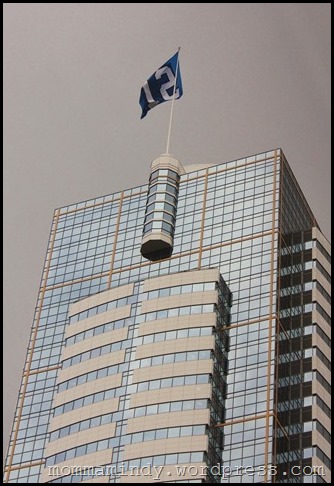 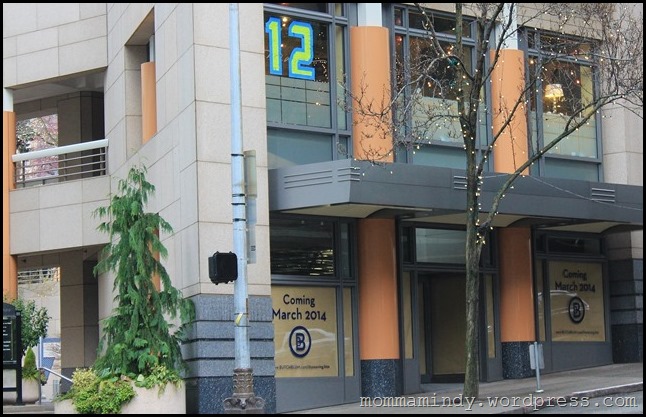 You see the flag at downtown Seattle intersections 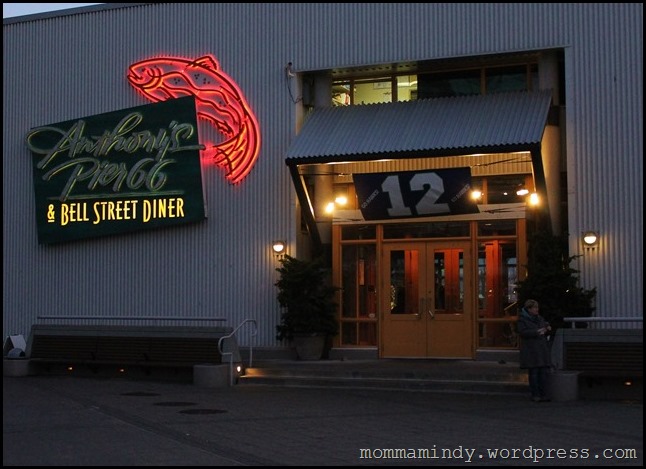 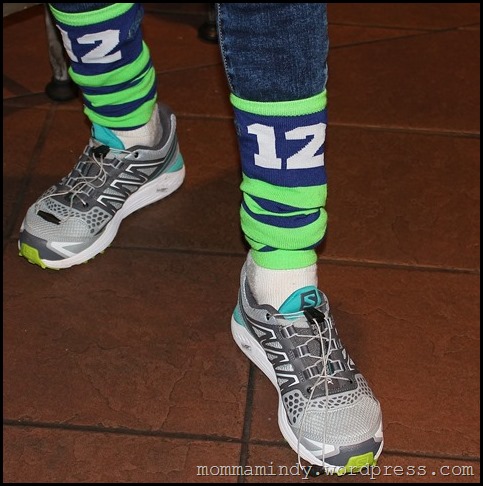 I think I was the last person in Seattle in on the secret. 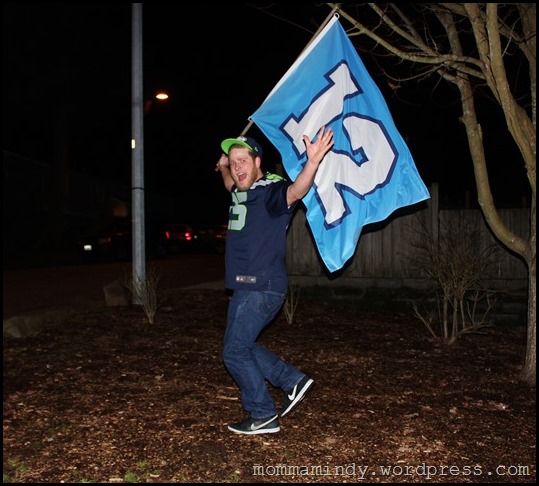 The #12 symbolizes undying loyalty, but not the fans’ loyalty.

The   #12 personifies the Seattle Seahawks’  loyalty to their fans. They know they put 11 men on the field, but they never play alone.

It’s the first time I’ve noticed a professional team publically testify it isn’t all about them. After all, if the fans didn’t buy the tickets and sports paraphernalia, they wouldn’t have a paycheck.

I mean loud and crazy loyalty. Louder than a Boeing 747 and Guinness Book of World Records kinda’ crazy. Seriously, I thought my six kids were loud, but the Seahawks fans are the loudest in history, and have a record to prove it.  Let’s just say that at a record of 137.6 decibels, they’re only 12.4 decibels away from shattering ear drums.  Ears can be damaged at 90 decibels.

The Seahawks understand more than football, they understand life.  We don’t accomplish anything in this world alone; personal talents and opportunities aren’t the only contributors to any success.

We all need people in our lives that give unconditional love and devotion.  We need people to appreciate our gifts, yet correct our mistakes without breaking our spirits.  We need someone to wear our colors, to proudly associate with our name, and to speak highly of us through the highs and the lows.  After all, the true fans are the ones that are devoted even when the team loses.

In honor of the SEAHAWKS the SUPER BOWL CHAMPIONS and the 12th MAN, I asked Seattle area authors, who also happen to be avid loud and crazy Seahawks fans, “Who is your 12th MAN?”

(To read more about each author, click on their name.)

Lynnette Bonner,  “The readers who post reviews, and come back for more of my stories each time I release one. They encourage me so much. My critique group has been wonderful and I wouldn’t be where I am today without them, but I look at them more as coaches and fellow players.”

Lesley Ann McDaniel, “My critique group, and the other members of Northwest Christian Writers Association who understand and encourage me.”

Diana Savage, “For 30 years my critique group has provided "12th woman" support for me and for my writing. During that time the various members who’ve come and gone have prayed me through crises while teaching me the finer points of clear, concise, and excruciatingly correct writing that touches readers’ emotions and honors God. If I ever win a Super Bowl for writers, my critique group will be the driving force behind my touchscreen success.”

Gigi Murfitt,  “My 12th man is my fellow NCWA members, my critique groups I have been part of, and my friends and family who pray with me and encourage me to write. My friend Cheryl is my biggest cheerleader. She really helped me edit both books. When I think of 12, I think of the disciples and how they sacrificed, supported and encouraged Jesus along the way. What a model for our twelfth man.”

Marilyn Gray, “12th man and their love and support has been so inspirational! The stories of all the Seahawk players and how they have overcome so many obstacles touched my heart! Why not me? Why not now? I want to live like that 24 hours, 7 days a week!”

Kathleen Freeman, “So many on my team! Without the efforts of many, my writing would be mediocre at best.”"

Judy Bodmer, “My 12th man is first, husband, who has encouraged me from the first to follow my dream, then my writing teacher Bette Hagman who took me to writing conferences, critiqued my first attempts, and said I had a gift, and last, my writing group. I wouldn’t quit a long time ago if it weren’t for people like Peggy King Anderson, Janet Lee Carey, Dawn Knight, Katherine Grace Bond, Roberta Kehle, Thorn Ford, just to name a few.”

Dennis Brooke, “My wife, Laurie, is my first 12th. Fellow writers James Rubart, Mick Silva, Kathleen Freeman, Loree Cameron, and Austin Boyd have also been big parts of my game. Not to mention many other NCWA members.”

My 12th MAN?  My husband, Scott, is my first fan, whether he supports me as a mother or a writer, he convinces me this world is a better place because I am in it.  Sometimes, I actually believe him.

My kids, who have filled my heart with their presence and their love notes through the years, “You are the best mommy in the whole world.”

As a blogger who’s been attached to her keyboard for over five years, my readers are also a huge part of that team.  I am so grateful for anyone who takes time out of their day to read what’s on my heart.