Have you ever criticized people for behavior then later find yourself sportin’ that same attitude?  Criticism kinda’ sneaks out of your heart in viperous form, then eventually slithers back to bite you.

I just ate some of that viperous humble pie.

One of my strengths and beliefs as a Mom has been to play with my kids.  I slept outside with them in tents and on the trampoline.  We made forts inside.  We played raft.  We went on teddy bear picnics.  We played games.  We built Barbie houses and Lego creations. We slid down the slide on waxed paper.  We made snow cones out of real snow.

From the time they were young I declared we had to do One Fun Thing a Day because I knew my Martha attitude could seriously use up every moment of the day with housework and homework.

I used to inwardly admonish the non-playing moms; the ones who sat silent on the sidelines, not playing, not jumping, not pretending, not praising.  I was usually the only mom sliding, pushing, tagging, rolling and giggling.

Not anymore.  Seven years of papillary thyroid cancer has taken a toll on my strength and stamina. Sometimes it just affects my mental attitude, because cancer goes where ever I go.  It has no respect for personal space. 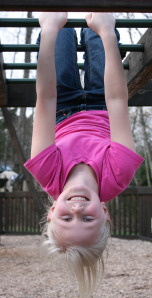 During a sun break, that magical time when the sun appears just long enough to give PNW’ers hope that summer will eventually show up, I took Rebekah to a park.  After walking what seemed to be a mile through “protected natural grasslands” on a boardwalk, we arrived at the glorious castle-like play area.  I was already tired, my heart racing a little,  I had to sit down on a bench. 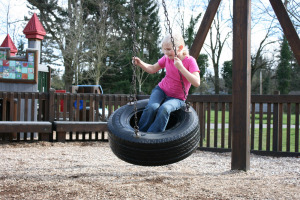 After a rest, I walked over to give her a push on this tire swing. The little girls who were next sweetly asked, “Will you please push us, too?”

Heart-broken, I walked away pretending I didn’t hear them.  I had just enough strength for my little girl, not enough for someone else’s. 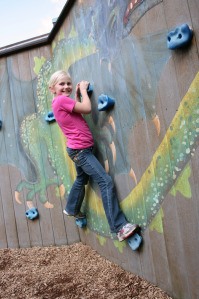 It was while I was resting and silently watching Rebekah climb the wall my viperous criticisms returned to bite me.  It never occured to me that moms might be sitting on the sidelines of the park because they don’t feel well enough to play – physically, emotionally, or mentally.

Criticism doesn’t leave room for compassion or understanding.  It puts yourself forward as the example, the expert, the law.  The only problem is, when we criticize, we eventually fail our own standards. After we fall, we wipe the dirt from the world off our hands,  bandage our wounds, and rise up with compassion and understanding. 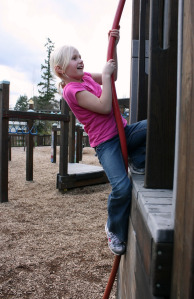 Beka, wanted to try a new trick, master a new skill. Strengthened by the humble pie I had just eaten and the rest I had received sitting and thinking, I had to try. 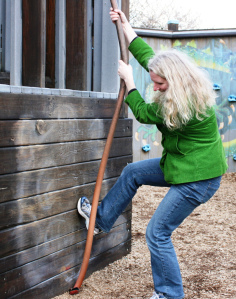 Beka likes being on the other side of the lens for once. 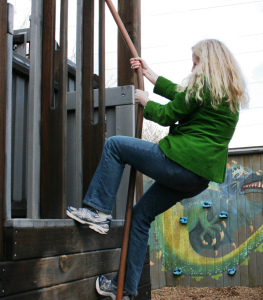 She cheered me on… 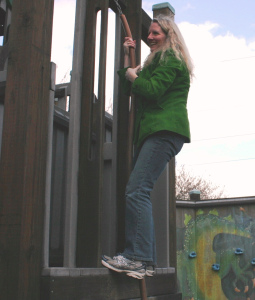 ….and enjoyed my minor victory.
I felt like I had won an Olympic Gold Medal. The four years olds who scaled the wall that day were much quicker, but that didn’t matter. I had made it to the two foot top.
*************
Cancer Update:
My three month bloodwork came back with news I haven’t heard in about five years.  My thyroglobulin and thyroglobulin antibodies were both undetectable.  You don’t have to understand the medical explanation – but it’s good news.

I will have a sonogram in June to check on the three cancer tumors that decided to grow back right after my second surgery two years ago.

My Vitamin D is low, which attibutes to some of the fatigue I am experiencing.

But for today, I will rise up on the wings of rejoicing for some good news.