We begin a story this way because the event was so frustrating, if we can’t share and laugh, we’ll cry. OK, maybe we cried first, then chose to laugh later.
I heard about a Miss Princess who used her mom’s new lipstick to write her name on the newly painted wall.
A friend’s precious little Man Cub  flushed his Daddy’s new, expensive watch down the toilet.
My little sisters, Angie and Laurie, held our calico cat down and wrote “kitty” on her white belly with a big, blue Sharpie permanent marker. As if we older people in the family might confuse Stupid, our cat’s name, with the neighbor’s dog, Sam.
Now, these are funny, treasured family memories.
But, not every circumstance in our children’s life should be discussed.
Yesterday, we began the series on gossip and defined it as “idle talk or rumor, especially about the personal or private affairs of others.”
The King James uses the word “talebearer”, which actually has a fascinating definition. It combines the word “walk” with the word “slander.” We walk with slander when we gossip.
Those of you with younger kids can’t fathom anything you say harming your kids. Who cares if they suck their thumbs or have more than one bm in a day? I believe when parents sin against their children with their tongues, it’s primarily unintentional.
But, careless words can harm as much as intentional words.When sharing one of those amazing stories about your kids, ask yourself these questions:

Am I betraying a confidence?

Kids tell us things from their hearts meant only for our ears and our hearts only. They’re secrets that need to be kept.

How you react when entrusted with their little secrets will help determine if they tell you their bigger secrets. It’s training ground for you.You might think it’s cute your six year old has a crush on a boy in her class.  But, if you repeat this too often, she might not want to tell you about her crush when she’s 16.

Could this give them an unfair label?

If people know your child is going through a lying stage, others might always view that child as a liar. Sad to say, some Christians can’t forgive and forget. If there’s a need to be truthful about your child’s struggle, don’t hide it.  Family, friends, and teachers may need a heads-up, or may eventually figure it out.

But, don’t broadcast it more than necessary.

It’s not pretending sin doesn’t happen, it’s loving our kids and giving them respect while they’re overcoming a sin.

If your child is 10 or 11 and is a bed wetter, you’ll need sympathy, advice, and someone to promise you they will outgrow it…eventually.
But, your child doesn’t need a lot of people knowing about the problem. In a few short years, he’ll be a teenager and will have enough issues. He doesn’t need to hear a well-meaning woman walk up to you a year or so later and say in public, “So, is _____ still wetting the bed?”
Leave a social media trail that won’t hurt or embarrass your children as they mature.

Could sharing their rebellion turn them farther from the Lord?

Some struggles our kids go through that don’t need to be public knowledge. It’s their story, and when they’re ready to tell it, they will. I was reading a book by a well-known Christian and she revealed how she discovered her son was a homosexual.
I was devastated for him.
He was already estranged from his family and his faith, and his mother published his deepest, darkest secret for the whole world to know. I didn’t think it would help bring him back to the Lord, but push him farther away.

When our kids were young, Scott and I gleaned encouraging and spiritual advice about parenting from many wonderful families.

However, when their kids became teenagers, there was a roadblock on that information highway. Initially, we thought it was because of shame over their kids’ behavior.
We were wrong. Out of love and respect, these parents were guarding their kids from undue criticism and judgement for their struggling kids.

Christians can sometimes remember sins long after the Lord has made them as far as the east is from the west. They didn’t want them to be remembered the rest of their lives as “the kid who did _________________.”

Will my vocalized disappointment with their decisions mar their testimony?

Let’s face it, no matter how much we love and respect our parents, none of us are living our lives and our faith exactly as they did. We need to give our older kids the same respect. If they aren’t making the decisions we’d like them to, leave it with the Lord.

Always pray, give advice when asked, and allow the Lord to complete the work. Let them grow up.

Share their victories, their good decisions, their accomplishments. Let people see them through your eyes of praise.

If there’s nothing to praise and you are dealing with a prodigal, then just praise the Lord.
His promises will come true in that child. 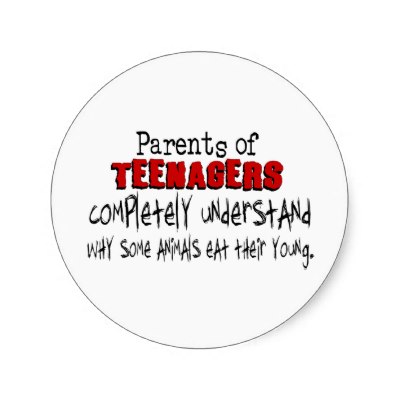 My girlfriend, Kirsti, has a similar sign in her home. If you don’t think this is funny, you don’t have teenagers yet.
Just sayin’.    🙂
I can tell this dear sister anything and everything about my kids. She’ll let me cry. She’ll tell me the truth if I’m not loving or forgiving. She’ll give me promises from the Lord’s Word. She’ll always love  my children and me, no matter what I tell her.
That’s why I can tell her.
I’m not telling you to hide parenting problems. I’m urging caution in what you share and who you tell.
It’s just time for parents to take the advice we give our kids,
“O be careful little lips what you say…”
Remember, our tongue is a rudder, steering the family ship.
We need to aim this craft for the shores of Heaven.
Share
Pin
Tweet
Email
Print

Previous Post: « Is Your Tongue Guiding the Ship Astray?
Next Post: Ya’ Know What My Hubby Just Did?!?! »