You can hear the snear in the voice when someone says, “Ya’ know what she just did?”

I know you all just repeated this to yourselves, didn’t you? Although when you say “he” and “she,” with scorn it sounds more like “HEuh” and “SHEuh.”
By using this tone of voice, nothing more needs to be said. Negative feelings have been induced.
Sometimes, we use this trick while sharing a story and we don’t want to appear to be a gossip. We think we’re telling the story in a way that  doesn’t seem to like we’re isapproving, but the inflection and the look we use when we say, for example, “Mother-in-Law”  tells it’s own story.
Why Do We Gossip?
1. It’s a way of comparing ourselves. We feel better about ourselves by finding a fault with someone else, especially if we think their fault bigger than ours. Remember that speck and log thing? 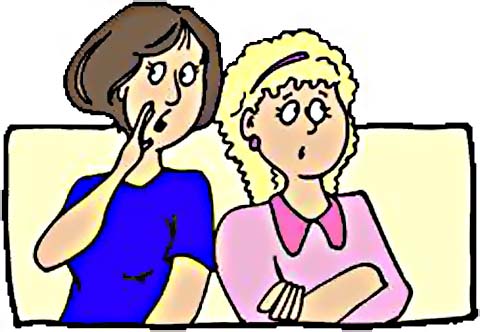 Women are good at this. When we see another woman, we judge her hair, makeup, clothing and figure, mostly to see how she measures against ourself.
To spiritualize this activity, Christians judge one another’s hospitality, the obedience of their children, their submission, or the fruit of their ministry.
A lot of ugly words can be used when there’s a failure to recognize the sin for what it is – jealousy.
2.  We like the feeling of being a star reporter, and being the first one to have the scoop.
This is great when someone has a baby or just got married, but save the scoop for news worth having your name attached.
If I don’t want to hear, “Momma Mindy said ____________,” I don’t say it.
3.  We rejoice in someone’s failings, especially if they’ve harmed us or if we had predicted their moral failings with our astute observations and discernment.
Proverbs 24:17
Do not rejoice when your enemy falls,
And do not let your heart be glad when he stumbles;
4.  We feel spiritual pride because we think our holiness is holier, our convictions are more convicting, or we know the Bible better.
5.  We gossip about a person when we’re failing to pray for that person. It’s hard to talk about someone when you’re sincerely  praying to the Lord for their faith, their life and their blessing.
We can talk to people about people, or we can talk to the Lord about people.
The first will destroy lives and harm our testimony.
The second will build up lives and give us a God-honoring testimony.
Remember, the tongue is the rudder, to steer away from the rocky shore. The Lighthouse will illuminate the danger zone.
Share
Pin
Tweet
Email
Print