The taxi driver driving us to our hotel in London began his tour-guiding with an apologetic caution.

“London is beautiful, but I haf to warn you, it does rain a lawt.”

Hubby and I smiled at each other like two people with a secret.

“You might have to carry an umbrella,” the cabbie advised, “it can just start raining.” 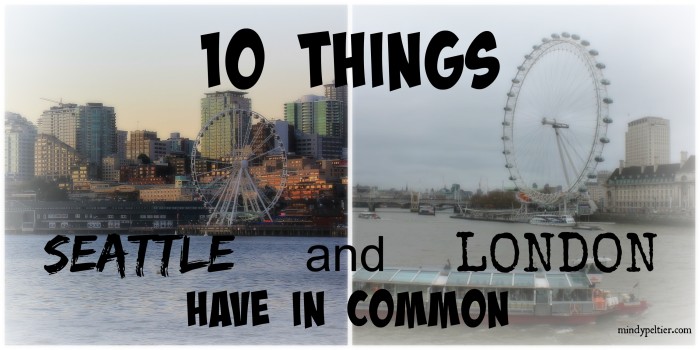 The weather isn’t the only thing Seattle and London have in common, but it is the most obvious place to start.

Seattle and London have similar climates, but I was surprised that Seattle has MORE rain and MORE annual sunshine.

Yes, I will stop complaining.

2. Umbrellas are for Tourists

It rains a lot. Life is too short to spend time putting up an umbrella, taking it down, shaking rainwater all over, and bringing more rain in on a wet umbrella than on your clothing.

Your hair wet. And if you have naturally curly hair like it do, it grows like a Chia pet in the rain. The edges of your jeans might get damp. But, in Seattle we don’t change our plans because of rain, unless it’s a downpour. We don’t even cancel baseball games unless there are huge puddles in the field. Counting the few number of umbrellas I saw, I assume Londoners feel the same. 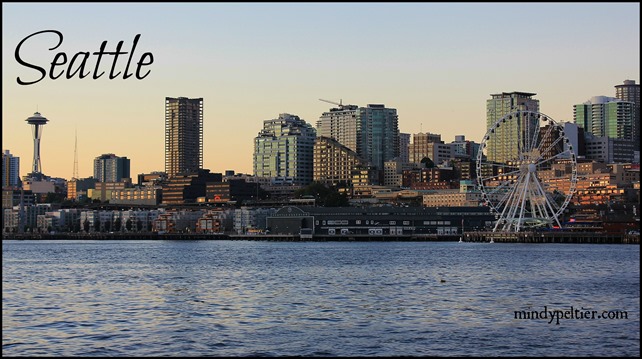 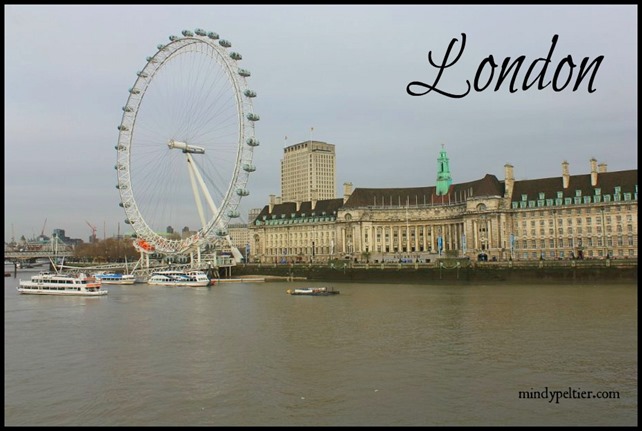 Notice the various hues of gray in both pictures?  See #1.

Although ivy is beautiful and blackberries are delicious, both can become a predator, wrapping themselves around trees, buildings, and fences. On the train from London to Bath, I was surprised to see both these plants. I wasn’t quick enough with the trigger-finger to capture the little building almost covered with vines next to the tracks, but I got one useful shot. 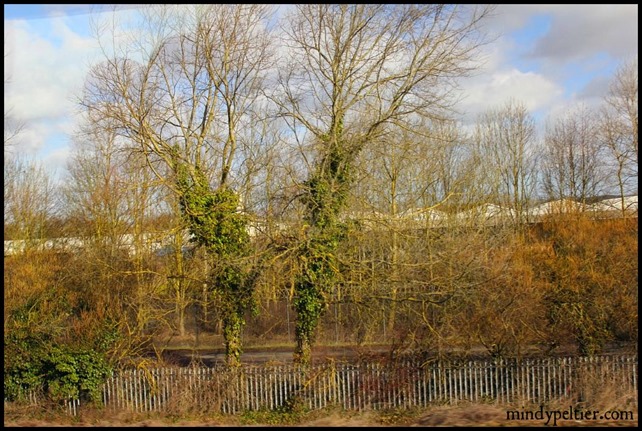 This was taken through the smudgy window of the Heathrow Express as we zoomed by the beautiful countryside on the way to Bath. Yes, we retrenched to Bath. (Name that movie!)

In London they use public transportation and walk to get around. In Seattle they drive everywhere, but many people work-out. Not me people, but other people. Seattle was ranked the 1st fittest city by webmd.com. I didn’t see many overweight people while there, but to my surprise, the UK was ranked the most obese country by Business Insider. I guess all the heavy people weren’t in the areas I toured. But, statistics do assure me that Europeans walk at least 3x as much as Americans.

Pike’s Place Market in downtown Seattle is famous for their musicians. My kids love the guy who plays his guitar behind his back while blowing on a harmonica, tapping a tambourine with his foot,  and hula-hooping.

My favorite group is the acapella group, A Moment in Time, the original street performers downtown.

They perform in front of the Starbucks that urban legend proclaims is the original. We don’t like to burst the bubbles for all coffee-lovers on a pilgrimage to Seattle, but the coffee shop is actually the fourth.

This is just a random guy in Seattle who really could play.

I do have some Scottish heritage, but I think bagpipes were made to play Amazing Grace.

Where there are people, there will be beggars. I struggle with this. I love giving, but I also know that some people aren’t willing to live without the way Scott and I did to get where we are today. Like the guy who approached us at the gas station and said, “You look rich. You should buy me gas.”  It was his attitude that turned us off, not his need. Seattle has WAY more beggars, but I still ran into them each day in London. 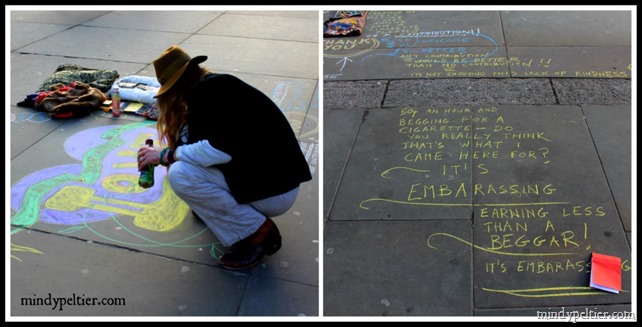 This guy should have taken a lesson from the girl in Seattle who sat with a smile and a sign that read, “I’ll be honest. I just wanna’ buy a cheeseburger.” She had more money in her little cup than anybody else I saw that day. He thinks being a street artist is different than being a beggar,  but I beg to differ.

I know many of London’s buildings and works of art are older than the United States, but even though Seattle is younger, the area loves art. Galleries, city park with waterfall, troll under a bridge, fountains, and outdoor sculptures fill in nooks and crannies around the city. We even have our share of architecture worthy of admiration. This appreciate flows across Lake Washington and into the area referred to as the Eastside.

Complete list of Seattle parks where nature’s art is esteemed.

I grew up in the upper Midwest, home of the stoic Scandinavians. You’ll hear UFFDA more than “I Love You” and hugs are reserved for special occasions like weddings and funerals. But, in conversation, people are very warm and friendly. In line at the grocery store people talk to you. Driving down dirt roads in North Dakota, people  wave to you. If you’re a stranger in a small town, they want to know why you’re there.

It took some adjustment to move to Seattle where there were a bajillion people who didn’t really care if I was having a good day or not. I learned they aren’t rude, they aren’t uncaring, they’re busy and distracted. If you stopped and talked to everyone, you’d never make it home. On the Tube in London I noticed strangers didn’t talk to one another. They weren’t rude, they didn’t shove, but they were politely going their own ways in comfortable silence.

You’ll have to go back.

I could only tolerate leaving London, a city I quickly fell in love with, because I was going home to Seattle. But don’t worry, London, as a famous American once said, “I’ll be back!”