Saturday, Scott and I, along with the youngest two kids, had an amazing experience. Some very generous friends toted us on their sailboat along a very scenic route and under five bridges, to position us under the perfomance route of the Blue Angels on Lake Washington. The Navy aviators were gracing Seattle with their commanding presence for the annual Seafair celebration.

I’ll use the Navy’s words from their website on the link above to save myself some typing. Besides, their writers use big, important-sounding words, cool facts, and stuff like that. 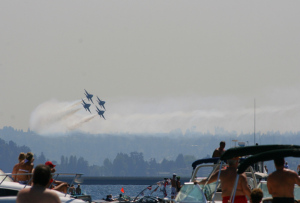 It includes the graceful aerobatic maneuvers

of the four-plane Diamond Formation, 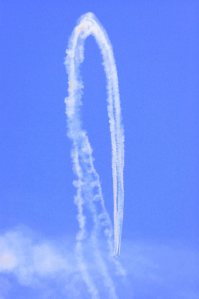 in concert with the fast-paced, 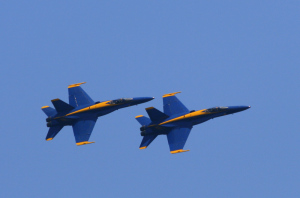 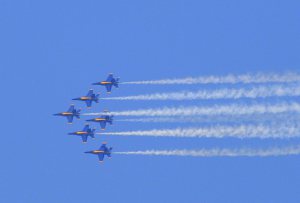 Finally, the team illustrates the pinnacle of precision flying, 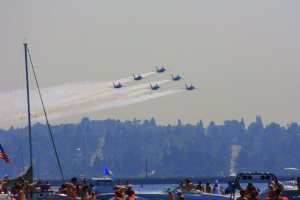 performing maneuvers locked as a unit in the renowned, 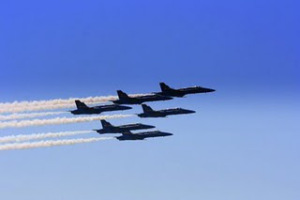 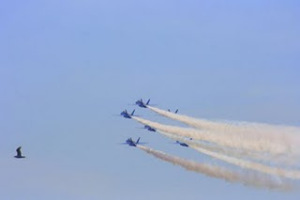 This bird couldn’t stay in formation. Must be from the Air Force or something. 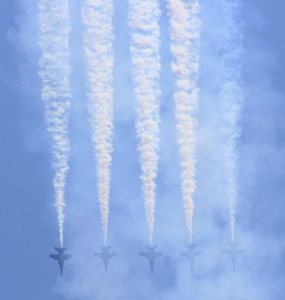 Then, there were only five. 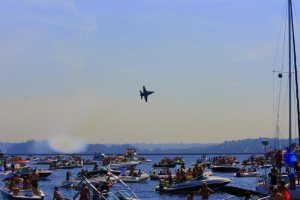 It was hard to match up sound and sight,
then one would come out of nowhere and scare the beejeebies out of you.
What are beejeebies, anyway? Do I want them back? 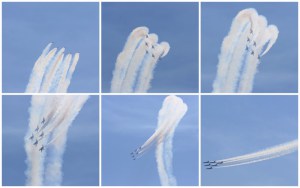 “Q -How do you produce the smoke, and why do you use it?
A -The smoke is produced by pumping biodegradable, paraffin-based oil directly into the exhaust nozzles of the aircraft where the oil is instantly vaporized into smoke. The smoke provides a traceable path for spectators to follow, so they can see the flight profile that has been flown. It also enhances safety of flight by providing a valuable means by which the solo pilots can see each other during opposing maneuvers and conditions of lowered visibility or haze. The smoke poses no hazard to the environment.”
Q – What is the top speed and rate of climb of an F/A-18?
A – The F/A-18 can reach speeds just under Mach 2, almost twice the speed of sound or about 1,400 mph. The maximum rate of climb of the F/A-18 is 30,000 feet per minute.
Q – What are the fastest and slowest speeds flown during an air show?
A – The fastest speed is about 700 mph (just under Mach 1; Sneak Pass) and the slowest speed is about 120 mph (indicated speed; Section High Alpha), both flown by the solo pilots during the show.
Q – What is the lowest and highest maneuver heights performed during an air show?
A – This varies due to weather conditions. The highest is the vertical rolls performed by the Opposing Solo (up to 15,000 feet) and the lowest is the Sneak Pass (50 feet) performed by the Lead Solo.”
So, that F/A-18 that snuck up on me, or is it sneaked, was flying about 700 miles per hour about 50 feet away from our sailboat. No wonder so many pics were out of focus. No wonder I almost fell off the bow of the boat while spinning around frantically trying to keep the planes in my viewfinder.
I kept telling Scott, “If I fall off the boat, grab the camera. Let me go. Save the camera!”
This was my biggest photographic challenge to date, trying to stay upright on a sailboat in the middle of Lake Washington in 90 degree heat, slippery with sunscreen and fighting slight seasickness. Yea, I’m kinda’ a sissy landlubber, definately no sea-legs on this momma. But, it was a once-in-a-lifetime experience, and I was willing to withstand anything to enjoy the view and the exhibition.
Check out their schedule, maybe they’re coming to your area and you can test your trigger finger at capturing a plane flying 700 mph.
Just don’t get whiplash.
Share
Pin
Tweet
Email
Print