My childhood was magical until I experienced the kidnapping of Susie Jaeger. I never had the privilege of meeting her, but I have never forgotten her.

Every summer day was an adventure waiting to unfold for my five siblings and me in the cozy mountain town of Helena, Montana. Under the watchful care of Mount Helena and the Sleeping Giant, we explored from the perch of our Schwinn banana seat bikes, the playing cards clothespinned in our spokes leaving a clickety echo trail. We swam at the Municipal Pool, fished at the Fairgrounds, and enjoyed $.25 movies at the Circus Twin Theatre. 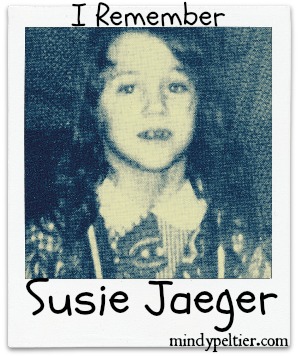 We collected aluminum cans for $.25 a pound to buy candy at Terry’s Convenience store. Biking home down the steep Lamborn Street was perilous because our legs couldn’t keep up with our pedals. With legs extended stiffly sideways and lips pressed together against bugs, we hoped no cars would enter the traffic from the side streets. We also crossed our fingers that our brakes would work at the bottom of the hill.

We slept outside in the backyard in our sleeping bags. Green apples were stolen from Mr. Beaver’s tree, sprinkled with salt, and devoured. Lemonade was sold and cold treats bought from the Snow-Cone Lady.

With over twenty kids in our block, there were usually enough to play baseball in the empty field in the next block over. Nearly every night we’d play and grumble over calls until we could no longer see the ball.

The June 25, 1973 disappearance of Susie Jaeger shattered my 9-year-old world of laughter and innocence. She was camping at the Missouri Headwaters near Three Forks with her family when an intruder cut open the tent and kidnapped her in the middle of the night.

At times we joked about things, but only to cover the new emotion we didn’t know how to handle, utter fear.

How could THAT happen?

There were several more kidnappings and murders that summer, but they’ve blurred together in an uncertain fear-colored haze. Her disappearance marked a chasm in my timeline, separating the idyllic childhood and the reality of living in a fallen world.

My husband and I moved to Wichita and discovered we were in the territory of the BTK (Bind, Torture, Kill) Killer. The police sketch stared unblinking in the apartment laundry room and from grocery store bulletin boards. We later discovered good friends grew up playing in the empty field behind his Park City house.

We lived out in the country for the first twelve years of our marriage, but when we moved into town, I wasn’t sure how to handle it. What was safe? How far could they walk? What size of a group made it safe? I daily muffled my fears with reasonable decisions to give my kids their own idyllic childhoods. But, allowing my children out in the world felt like that bike ride down Lamborn Street.

They walked to the skating rink and skated alone. They rode their bikes and roller-bladed. They played baseball in the park and picnicked on the front lawn. I peeked out the windows, checked on them often, and prayed.

I drilled safety precautions. When our girls got jobs they were given mace for their key chain. When one daughter started running I pushed aside my fears, even though the police website showed 25 sex offenders within a mile radius, a few Level III within a few blocks.

She once claimed, “Mom, by the time you let us go around the block by ourselves, it was because we were driving in a car.”

I laughed at her exaggeration, but I knew she had felt my fear. Kids kept disappearing and grief etched their names next to Susie’s on my heart.

Because I knew that even when parents do the right things, as the parents of all these beloved children did, they still couldn’t protect them from evil.

And as I reviewed Susie’s life story through news articles, my life has again been touched because her life left several profound impacts.

During the investigation of her disappearance, FBI Agent Peter Dunbar utilized the new method called “offender profiling”  that was developed by Howard Teten and Patrick Mullany. This is now a standard crime-solving procedure and has helped solve many similar hideous crimes.

Susie’s mother preaches a much-needed message in this world. After agonizing through her horrific loss, Marietta made a conscious decision to forgive and daily sought to walk in that peace instead of allowing fear and anger to destroy her. The killer called on the first anniversary of the kidnapping to taunt and torment her. Faced with her calmness and her offer of forgiveness, along with an FBI tape-recorder, killer David Merihofer exposed enough details to be caught. He later confessed to several other murders before committing suicide. Marietta’s forgiveness brought not only peace to her life, but safety to others.

(Photo taken by Jim Harrison for Find a Grave)

I realized while looking at my notes it’s taken me over six years to write and publish this blog post. And even now as I write about that summer 43 years ago, the tears still flow.

I’ve read about the new Free Range Parents that mock mothers like me, ones who see evil lurking around every corner. I hesitate to admit how I fear for my children’s safety because I hear their scorn and see their fingers pointing.

They don’t understand, because they don’t remember Susie Jaeger.

Encouragement from the life and testimony of Marietta Jaeger, and her ministry of forgiveness.

The Night I Forgave My Daughter’s Killer

Previous Post: « Look Back to the Future to Set Life Goals
Next Post: The Boy Who Walked With Me »