I didn’t know how important jeans were until I was in the 6th grade.

Back in the Olden Days, as my kids call my childhood, I lived on the north side of Helena, Montana, in a neighbor with small ramblers filled with kids, lotsa kids.

In my neighborhood, we were nearly all the same.  We had moms and dads living in our homes.  Our moms sewed and gardened and made homemade cookies. We kids rode bikes, built forts, went swimming at the Municipal Pool,  and played baseball for hours in the old cemetery.

My life changed in 6th grade.  Our Bryant Elementary School only went up to 5th grade, so we all trudged up Lamborn Ave. to Ray Bjork on the hill.

It was a newer building, with new playground equipment and unblemished sidewalks without weeds in the cracks. The building didn’t have crumbling stucco painted an  institutional light green, but had new bricks with clean mortar.

The building wasn’t the only different thing in this new world. The kids on the hill wore new clothes. They went on vacations with their families. They skied. They had hair styles, not hair cuts, because their moms didn’t cut their hair. They had cool shoes and even cool tube socks.

Suddenly, my world had division –  THEM and US.

I  decided the biggest division came with the jeans. 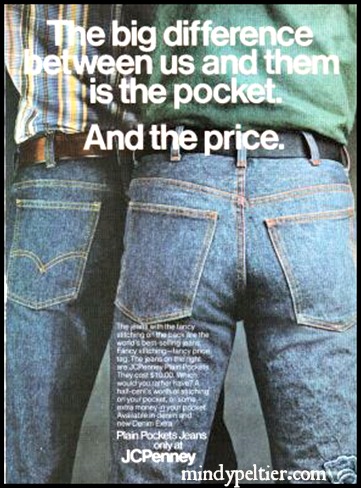 The kids in my old world wore jeans without designer names, the fancy stitching, or the pocket décor. 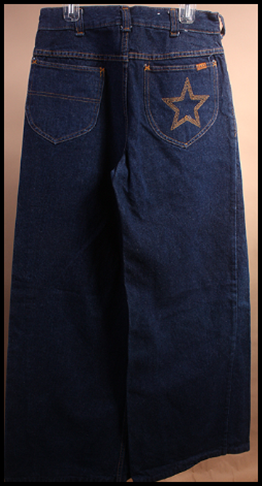 In my new world, the coolest girls wore HASH jeans.  They were $50.  I couldn’t fathom having that much money or spending it all on one pair of jeans. At $.75 per hour, I would have had to babysit for 67 hours for one pair of jeans.  Wasn’t going to happen. 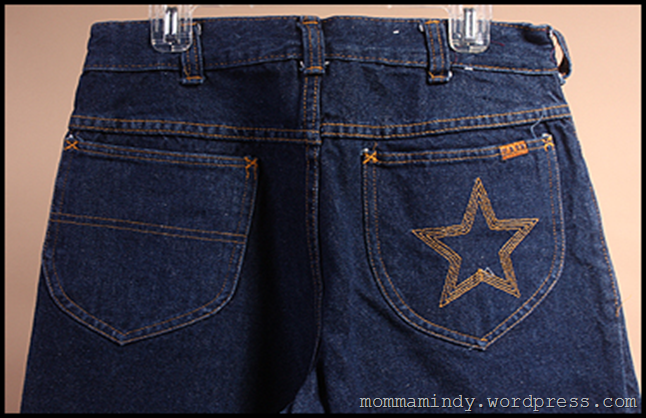 But a girl could dream how good she’d look in these jeans.

And it wasn’t only what was on the back pockets, it was what was in the front pockets.

I had lint, an occasional note from a friend,  and change. They had money.  Not change, bills.  When we shopped at Terry’s Convenience Store at lunch time or after school, they could buy  from any shelf in the store, while my friends and I hovered around the bottom shelf of the first aisle with the penny candy and the Ferrara Pan boxes that cost $.10.

On a fall sunny Saturday, I  walked my little sister up the hill to my new school to let her play on the fancy playground. Another kid was already there, but he wasn’t in a friend-making mood.  He’d purchased an entire box of ice-cream sandwiches at Terry’s, something we’d rarely had. To keep our  ice-cream loving family of eight satisfied, my mom purchased a big bucket of vanilla and Neapolitan ice-cream weekly. It lasted a lot longer than a box of specialty treats.

I expected sharing to be a universal language.

He pulled out the last two ice-cream sandwiches, held them out towards us with a sick grin, then mashed them between his fingers, smiling the whole time. The melted vanilla ice cream and bits of mangled chocolate cookie dripped between his fingers.

I was filled with shame because he had noticed our desire and took joy in crushing our expectation of kindness.

During the year I was also educated on what else those allowances could buy. Another unfaded memory is one of the Snob Knob (the hill with expensive houses)  kids explaining to me what pot was, why they would want to smoke it and how beer tasted.

As the year progressed and I experienced THEM and US morphing together into the 6th grade class, I learned a lot of important life lessons.

Walking up that hill in my JC Penney jeans into a new world was a great experience, because in 6th grade, my life was changed.

It wasn’t about the jeans, after all.