I grew up watching MacGyver, I didn’t expect him to become dinner conversation when we were adults.

In between bites of something I’d slopped together for dinner, Mr.  P said, “I walked by one of my employees today, and he was just sitting there staring at his pen.”

In fact, I bit back a sarcastic, “SO?” After being with the kids all day, I crave adult, intellectual conversation.

Mr. P tried harder to impress me. “No, I mean he was really staring at it. He was holding it in his hand, turning it around and around, and staring at it hard. It was so out of character for him  (the resident hard-working genius) I had to ask him what he was doing.”

Now I was a little impressed. And curious. “What was he doing?” 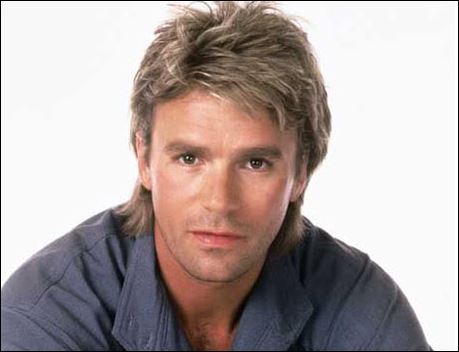 “He said, ‘I’m just sitting here wondering what MacGyver would do with this pen.’ “

For those of us that grew up watching the Man with the Mullet weekly diverting disaster with a pen, a bobby pin, and/or a stick of gum, we understood it was a rational reason to daydream at work. Not only was I impressed and humored by his employee, my faith in my husband’s ability to carry on meaningful conversation was restored.

A brilliant problem-solving strategy is to ask “What would MacGyver do?”

Fast forward a few weeks. I checked into the local hospital for three days of solitary confinement for radioactive iodine treatment. I’d starved on a low-iodine diet for weeks to deplete my body of iodine, which would be reintroduced with radioactivity attached. The RAI would go on a seek and kill mission to all remaining thyroid cells in my body which, in my case, would be cancerous. (My papillary thyroid carcinoma had metastasized. My surgery three months prior had removed my entire thyroid and 30 lymph nodes.)

My backpack was filled with my laptop, a journal, books, pens, and VCR’s. The splurge was on two brand-new magazines. Since three days in the hospital is the closest thing to a vacation a mom of six can get, I was determined to make the best of it. 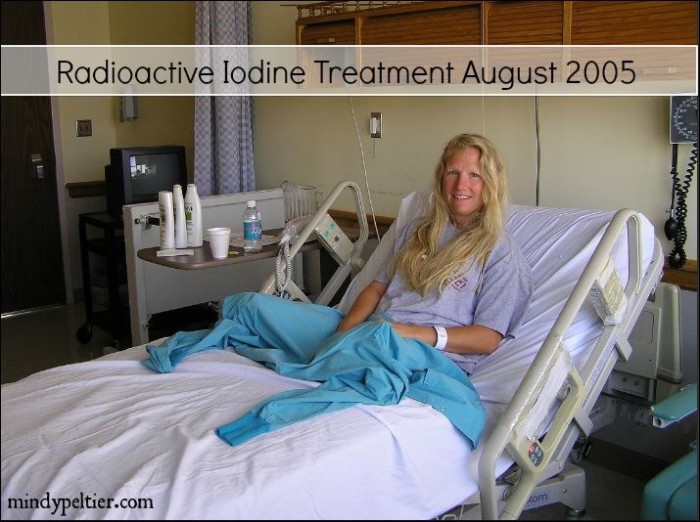 Feeling like a freak in a low budget Science fiction movie, I watched the nuclear medicine guy enter my room in full gear, only missing a gas mask, unscrew a heavy thermos-looking container, and take out another thick bottle. He opened that one and handed me the 100 mCi pill. I swallowed it.

He would return periodically with a Geiger counter to check my level of radioactivity. When it was below four, I could leave the hospital. It generally took three days of pushing fluids, relieving fluids, and showering.  I know, TMI, but I had to live it, you can relive it.

He informed me that since anything I touched would become radioactive, he’d also test my belongings. Anything above the safe level would be locked up for six months in a vault until the radioactivity depleted.

In other words, everything I brought to stay occupied was going to stay in my backpack on the other side of the room. The only VCR on the floor wasn’t in the room, another patient was using it. How did my doctor not know the procedure when he told me what to pack to bring to the hospital? 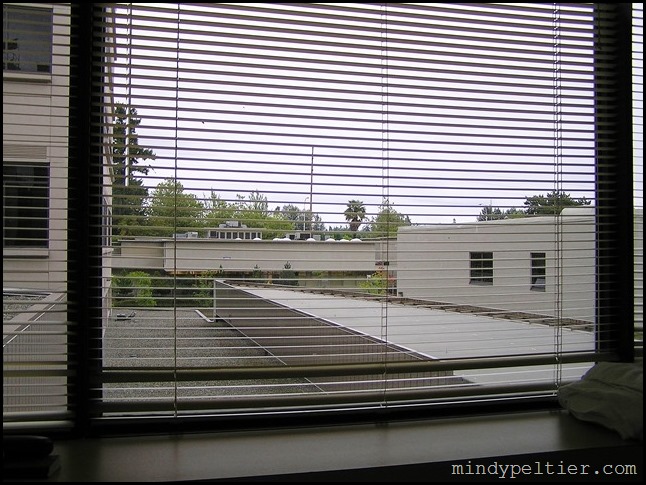 I stared out the window. I paced the room. After a few hours I was bored and freezing. There was no way to adjust the thermostat in the room, so I put on the extra set of scrubs. Then I put on more socks and scrounged through the cupboards for towels and blankets.

When the nurse entered long enough to lean over the metal wall of protection and set a tray of cold, bland, iodine-free food in Styrofoam containers on my rolling tray, I asked her to adjust the AC.

She stared. She stammered. “It’s broken. The guy was supposed to fix it before you got here.”

“I don’t mind if he comes in while I’m here. I’m freezing. I’m wearing all the clothes in the room.”

“He can’t come in, you’re radioactive. It isn’t safe, you know. I’ll bring you a few more blankets.”

I huddled under the pile of thin hospital blankets and towels, trying to create some body heat by pulling them over my head and breathing under the covers to warm up. We people who grew up in North Dakota with a wood-burning stove that ran out of firewood in the middle of the night know the trick of becoming your own furnace.

It wasn’t the mini-vacation I planned. I wondered if I would have received better treatment if I had robbed a bank. Since feeling sorry for myself for three days wasn’t an option,  so I entertained myself by replaying conversations and last moments with the family I missed more than ever.

What would  MacGyver do?

Jumping out of bed too quickly, I lurched and the non-skid bottoms on those adorable tan hospitable socks kept me from falling.

I grabbed a pen from my bag. Nope, couldn’t use my favorite pen. It had to be an icky pen. A writer needs the perfect feel and the perfect ink. I scoped out the room.

What could  I do?

The ceiling vent was the only option. It was directly above the bed blasting air piped in from the Arctic without a lever to close it.

It had to be MacGyvered.

I rolled the bedside cart until the food tray was directly under the vent. Armed with the pen and a white washcloth, I climbed up onto the tray and went to work, the plastic grippers once again keeping me upright. Slow movements kept the wheels from rolling. I didn’t have enough washcloths to block the entire vent, so I strategically jammed it in like a rudder so the airflow would be aimed towards the window.

“I’m freezing. I had to do what MacGyver would do.”

She wasn’t impressed, but she should have been. “Well, if you fall and break your arm, we can’t help you, you know. You’re radioactive.”

They’d be treating me for hypothermia if I didn’t take action, so feeling like my own hero, I ignored her cranky self. 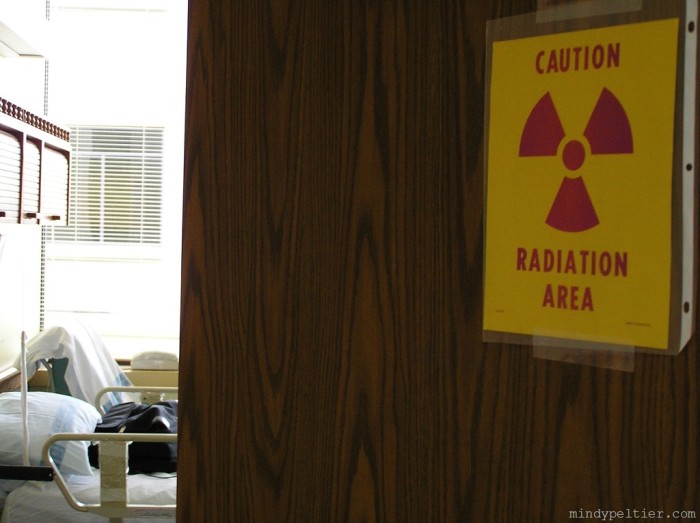 She set down a blanket on the chair and walked out, shutting the heavy door that was supposed to keep my gamma rays inside. Knowing the blankets they gave me would be locked up for six months until they could pass the Geiger counter test, they couldn’t be too generous.

I climbed down and sat below the jet stream. Better. I climbed back up and made a few adjustments. I shoved the bed towards the door as far as I could go, climbed back in and tested. By snuggling on the far right side of the bed, like I do when hubby is hogging the bed, I couldn’t feel the blast.

I crawled back in bed in my beloved hospital socks and two pairs of scrubs and pulled the covers only up to my chin and not over my head. 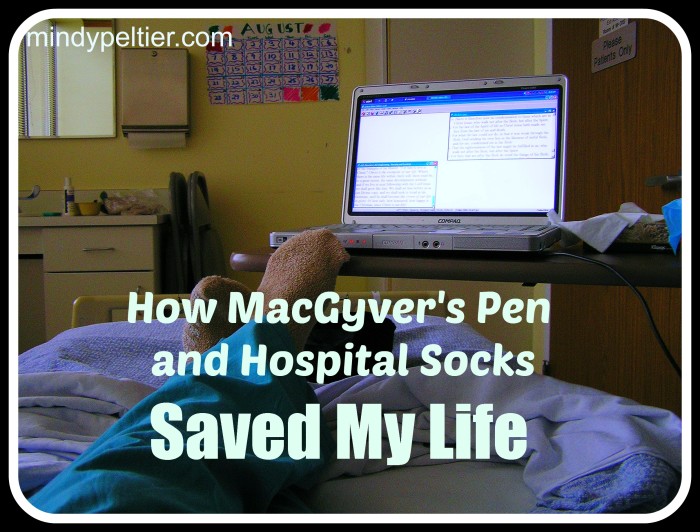 I had approximately two days, twenty hours, and seven minutes left and I no longer feared being frozen to death while radioactive.

Thanks to MacGyver’s pen and my hospital socks.  Oh, and my husband’s adult, intellectual, dinner conversation.

How MacGyver’s pen and hospital socks saved a life during cancer treatment.