Everyone calls Marysville, Montana a ghost town, except the eighty-three residents.

These die-hards are known for spouting, “It ain’t a ghost town until the last dog leaves.” 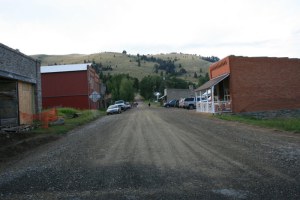 Tommy Cruse found gold here in 1876 and named his mine Drumlummon after his parish back in Ireland. About $30 million worth of gold and silver was mined out in about 30 years. 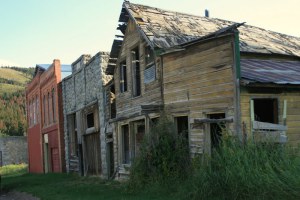 But now, the buildings precariously hold each other up. The insides are filled with dangerous crumbling foundations, rotting floor boards, broken beer bottles and dangling wiring. 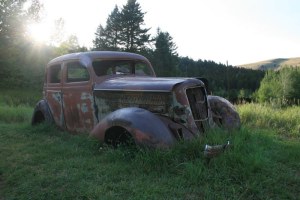 This car was parked off of Main Street. How do you just leave your car on main street so long that weeds  overtake the dashboard? Did someone just forget where they parked it? 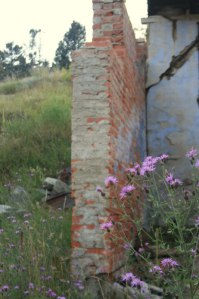 Tommy Cruse named the town of Marysville after the first female resident, Mary Ralston. In the boom time of 1880’s and 90’s, the population grew to around 4,000 people. 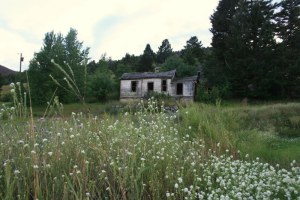 Four miles below crest of continental divide, Lewis and Clark passed through this area on their famous cross-country trip. Too bad they didn’t stop and pick up a few gold nuggets. That would have kept the Congress from fussing at them for the high expense of their trip. 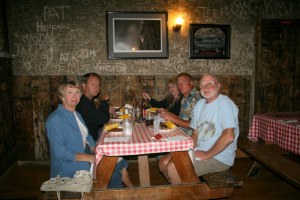 Mom and Dad, husband Mr.P, and brother Al
The attraction at the end of the 20 mile twisty and turny road from Helena isn’t just the vacant buildings, it’s the restaurant – Marysville House. It has a D- rating from the Better Business Bureaus website, but is really a local legend.

There really isn’t a menu. You have four or five choices for your main course, two of them are steak. Your side dishes include a piece of corn on the cob that has been boiling all evening, a pile of baked beans that are smoky and spicy, and incredible sauteed mushrooms. The white buns mighta been from the day-old bakery.

When my husband ordered a salad the waitress snorted with redneck disdain and said, “We don’t DO salad.”

The service wasn’t really that great. Our waitress smiled once when she saw my Dad’s credit card coming out to pay.

We sat at unpainted picnic tables. Red and white checkered vinyl tablecloths, complete with holes and dirt etched into all the white squares, were the only color in the building. My brother was astounded at their decorating. I guess they hung a few pictures on the walls since he was there last. That isn’t wallpaper in the picture, it is names carved in every square inch of walls and ceiling.

When he further marveled that they now had a kitchen, I understood the BBB rating. They used to grill everything outside. How can the health department inspect a restaurant’s kitchen when they don’t really have one? 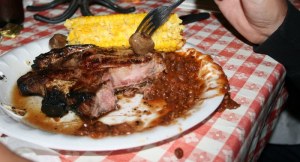 Notice the dishes? Yea, foam plates that fill up our landfills. We had real silverware, and after my brother carefully bent the tines into place, his fork worked pretty well. He figured a guest didn’t have a pocketknife and used it to etch names into the walls.
Notice the plate isn’t cut in half? Mr. P said this 24 ounce rib-eye was one of the tenderest, juiciest, most delicious, tastiest steaks, “the ultimate in deliciousness.”

He’s eaten a lot of steak from coast to coast.

IT WAS A GREAT STEAK.
When you bite into that big ol’ hunk of still bleeding cow, you forget the bent-tined, spotted fork that is guiding the meat into your mouth, you forget your elbows are implanted on a rustic picnic table and you’re craving salad.
That’s why people continue to endure eating in primitive conditions; because they want to eat a really good steak and then go roast a marshmallow over the fire-pit for dessert. Just like in the good ol’ days.
Except we didn’t pay in gold dust. 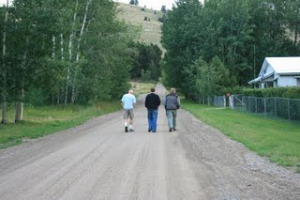 After the meal, a stroll through town helps digest the pound of meat you ate.

The sounds of children laughing and dogs barking echos down the empty streets. Instead of being a presence, it’s a blatant reminder of absence.

Money usually leaves a lasting impression. Monuments are built. Impressive and enduring buildings are created with such ornate touches that generations continue to marvel at the grandeur. In Marysville, there’s nothing left of the $50 million but the memories, the stories, the crumbling facades, and the gold fever that still lingers in a few hearts.

I marveled at the complete loss of prosperity and life.

As our feet scuffled through the dusty streets and we began to shiver in the evening shadows dancing on the ghostly buildings, my heart wondered about those people of long ago.

Did they use their money to buy the ranch they had been dreaming about? Did they send it to bring their families from back East? Or, did they drink and gamble it away in the saloons? Did the wealth make them or break them?

Riches can snare the soul. Rich people aren’t always happy people. Rich people don’t always have good relationships. Rich people can trust in themselves and their wealth and not in the God, the creator who put the veins of gold and silver in the earth.

Is it a sin to be rich? Is it a sin to discover the mother lode of gold? No. The LOVE of money is the root of all evil, not money.

The Biblical patriarch , Job, understood the error of putting trust in earthly riches and not in the Lord.

Job 31:24, “If I have made gold my hope, or have said to the fine gold, you are my confidence;”
31:28, “This also were an iniquity to be punished by the Judge: for I should have denied the God that is above.”

Solomon, the richest man in the Bible, also understood the place gold and silver should have in lives of men.

Proverbs 16:16, “How much better is it to get wisdom than gold! and to get understanding rather to be chosen than silver!”

Did the people that thronged  Marysville over 100 years ago have wisdom and understanding of the Savior? Or did they just have gold and silver?

Then, I turned introspective. Will my life be best represented by a deserted, dilapidated building or by an ornamental, enduring edifice?

“Only one life,
will soon be past,
Only what’s done for Christ
will last.”