Three years ago, my son began playing baseball.
As a stay-at-home Mom,
I immediately  identified with the umpire behind the plate.
Towering above the players like a proverbial giant,
his little magic clicky thing keeps track of the pitches.
He constantly knows how many balls, strikes, outs and what inning it is.
His word is law.
Calmly and deliberately, he watches and judges all.
He controls the players and the crowd
with decisive words and unchangeable decisions.
He doesn’t have to make his presence known.
We all feel it. 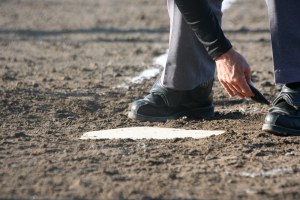 His greatest power, though, is in the bristles of his little whisk broom.
When visibility of home plate is marred,
the game is stalled long enough for him to sweep it clean with confident strokes.
Meticulously, he strokes top to bottom, left to right, while all watch.
Over and over during the game,
he cleans homeplate without one word of reprimand
for sand being tracked on his freshly swept plate.
He never fusses about how many times
he has already cleaned up after them.
He never threatens to just end the game
if they mess up home plate one more time.
Of course, I don’t expect that behavior.
He is the ump and I expect him to do his job.
I am always a little reprimanded watching the umpire.
Isn’t being a Mom my job?
Doesn’t that include cleaning up
what gets dirty while the game of life is being played?
I am also dismayed to admit,
although we all appreciate his great service to our team,
rarely any of us thank him.
We just expect him to do his job.
And I expect my kids to be different?
Each game, I absorb the wrist flicking action of the umpire,
and contemplate the power of my words and actions.
Baseball may be making my son a better athlete.
But the umpire is making me a better Mother.
Share
Pin
Tweet
Email
Print