Some of you know my husband’s name is Scott.
Some of you know that my husband is getting older.
We’re the same age, but he is 8 months older.
In my mind, that’s way older.
At 47, I guess we’re officially middle-aged.
He’s just more middle-aged than me.
Remember, he’s way older?
He’s having a mid-life crisis.
I’m seeing the signs.
There are things about his life he wants to change.
Some men buys sports cars.
Some men start working out.
Some men get toupes.
Not my man.
When we go out to eat,
on those rare date nights,
I know it’s almost time to
“belly-up-to-the-bar” when the teen-age waitress hollers,
“Jack, table for two,
JACK!“
Yep, he wants to change his name to
Jack.
He bemoans we didn’t name one of our sons Jack.
He wonders out loud if he could get away with a legal name change.
It gets really bad when he dreams about me changing my name to Jill.
Just when I was getting used to my hubby of 25 years being called
JACK,
he began showing other fruit of his aging crisis.
He went into a store.
A store he’s never gone into before.
A store where he doesn’t really belong.
He bought something he’s never bought before.
Something that isn’t the usual thing a man of his integrity would buy.
In the store people were eyeing him with curious snickers.
I was actually getting a little uncomfortable.
I tell ya’, this middle-age crisis thing is getting a little dangerous. 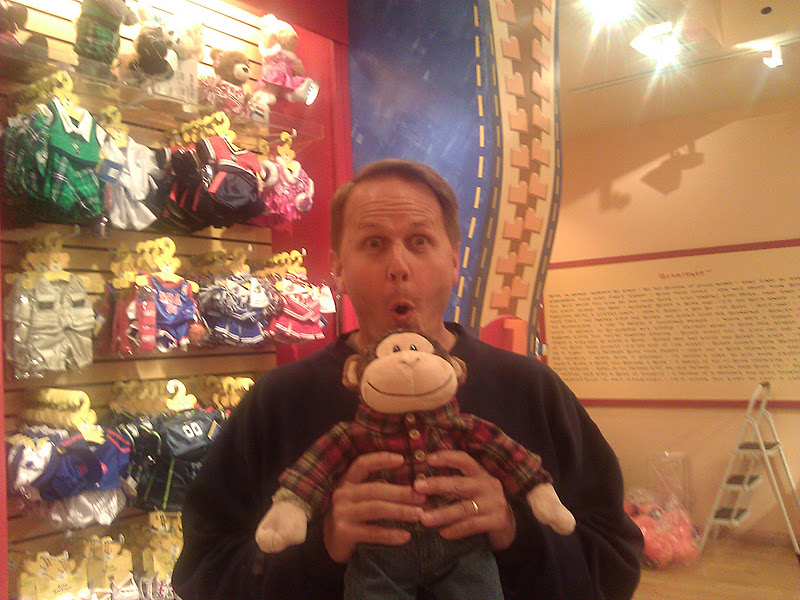 I’m a little worried about what he’s gunna’ do next.
Yea, that’s his Monkey, Jack.
Jack is wearing,
(I have to whisper this part) – whitie tidies,
(back to my normal voice)
jeans and a flannel shirt.
Jack is from Minnesota, can ya’ tell?
Jack was eyeing the fishing outfit,
but he’ll have to get that later.
Ya’ know I was describing Monkey Jack’s clothes,
not Hubby Jack’s clothes, right?
Right.
I think he was feeling left out with all the adventures
Rebekah and I have with our Build-A-Bear Monkies. 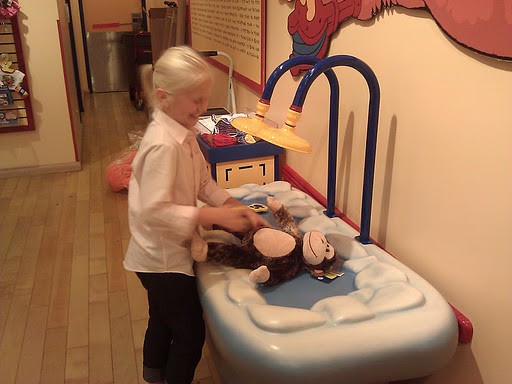 Speaking of feeling left out,
Daddy let her help.
I think it soothed that uncomfortable feeling that all
the other kids in the store were getting toys,
not watching their Dad splurge.
(don’t mind the pics, those cell phone things aren’t high quality) 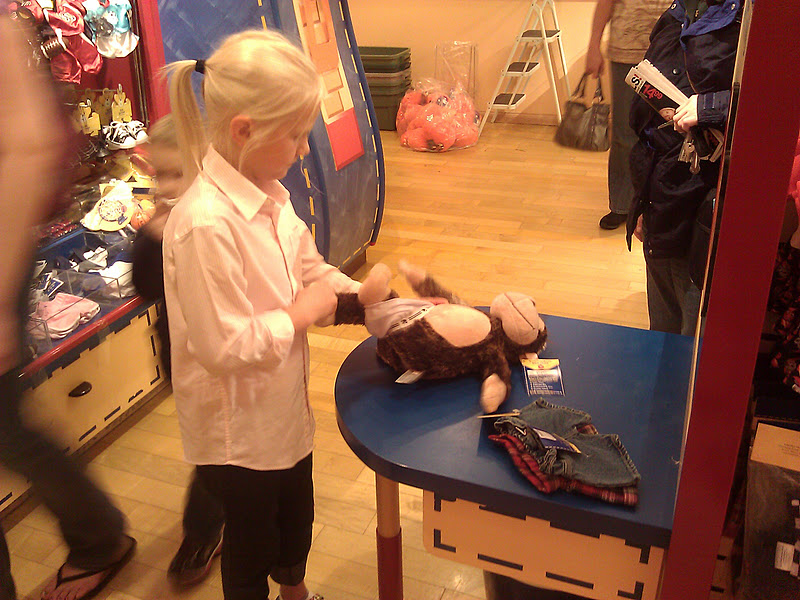 Daddy Jack picked out the clothes, but she got to dress Baby Jack. 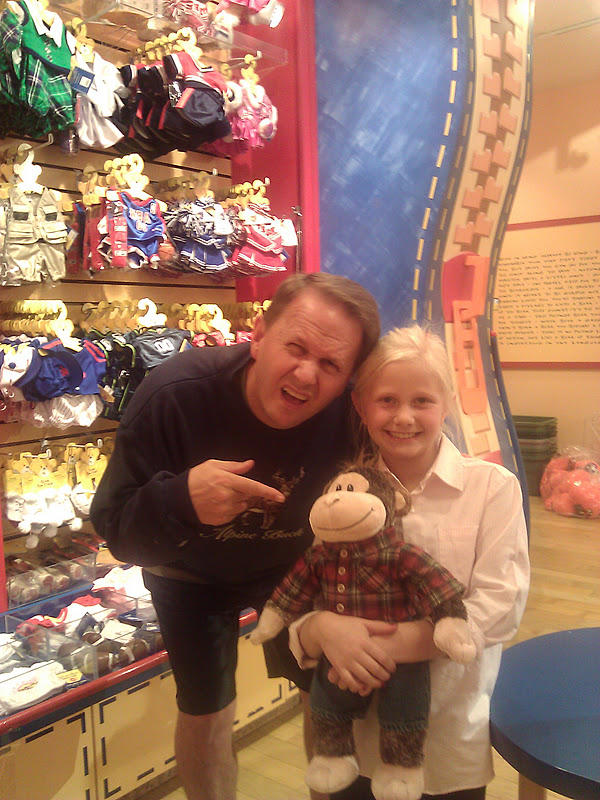 Daddy Jack a little incredulous over his momentary weakness.
After all, this is a man used to buying things with
power cord and engines, not stuffing and a tail.
Formerly, this man’s happiest day,
next to marrying me,
was the day he bought his Stihl chainsaw.
How well I remember his thrill,
“Honey, it’s a STIHL.  A REAL STIHL.”
I think he had a tremor in his voice,
he was so awestruck with his good fortune.
He’s a Minnesota boy through and through.
That day, he was so happy he just began cutting stuff up.
See why I call this a crisis?
He goes from Minnesota woodsman to stuffed animal owner?
Buying toys is my normal behavior, not his.
I guess if the neighbors hear the chain saw in the next few weeks,
they better beware.
It will be the prelude for Lumber Jill’s mid-life crisis. 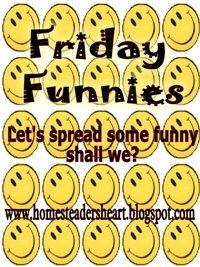