Slogans promise us great victory by ignoring pain. This can be true. 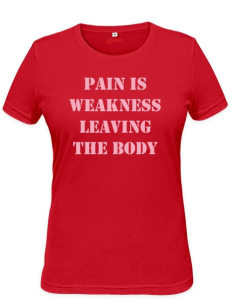 Click on link to purchase this shirt on Amazon.

Pain is a part of everyone’s life. The slogans inspire us to endure and embrace pain as part of the necessary process to make us stronger.

Ten+ years of artificial thyroid hormone left my body weakened. A spring diagnosis of osteoporosis was  depressing. It was a serious blow after ten years of fighting cancer, especially when I looked into the two drugs I was offered, Prolia and Forteo. Click on each link to see an Everest-sized list of side-effects. Are you kidding?

I want to get better, not worse.

The side-effects are more frightening than the diagnosis.

I chose to begin with food and exercise options.  I hate exercise and didn’t want to pay a bunch of money to see buff people in work-out clothes, walking was a good option. But it was boring. In July I decided if I ran I could get it over sooner. I hadn’t run since high school, except to occasionally catch a wayward toddler sprinting through the house naked after a bath or one that escaped out of the van and into the parking lot. The clink of the sliding van door was a starting gun  in my kids’ heads. They’d be off in a race to see who could get run over first.

Around the same time I was inspired by the Grand Forks Herald’s coverage of the oldest runner in the Boston Marathon, Katherine Hughes Beiers. We graduated from the same small ND town. She started running at 50 and it took her four months to run a mile. 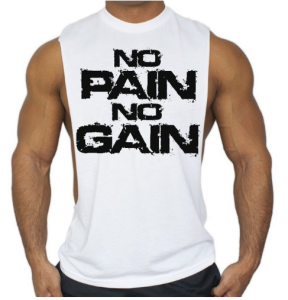 Click on image to purchase this shirt on Amazon. Model not included.

The first time I ran, I ran four blocks. It hurt to breathe and my heart was pounding so I promised myself to only run in places where people could give me CPR if needed.

There are still different aches and pains nearly every day. Most of the time I push through. I run in light rain, snow, and on vacation. At a  hotel in Texas I was too intimidated to figure out the treadmill in front of the color-coordinated, muscle-bound gym rats, so I ran on the top of the parking garage.

Sometimes the pain needs rest. When my knees hurt I took a week off. Now I’m off with a hurting back.

Women don’t like to rest when there’s work to be done. We especially don’t want others to do the work for us. One of the hardest things about cancer was daily choosing how to use my limited energy. I couldn’t do it all.

Discerning when to push and when to rest with our spiritual health is harder.

We have to be “Christian” so we accept what life gives us and still keep up with our obligations and ministries.

Our pains might be caused by  a feud or split in the church. A betrayed confidence. A wayward pastor or spiritual leader. A friend’s affair. Financial troubles. Prodigal children. Unfulfilled goal. False accusation. Gossip. They usually  happen in a series and we endure, endure, endure, then crash.

This kind of pain also gives off physical symptoms, but we usually blow them off. Hey, we’re women, we always have issues, with sleep, weight, forgetfulness, fatigue, and memory, right? Wrong! These are warning signals that it might be time to stop PUSHING through your pain and get some much-needed rest.

It might be time to disengage from activities and engage help. 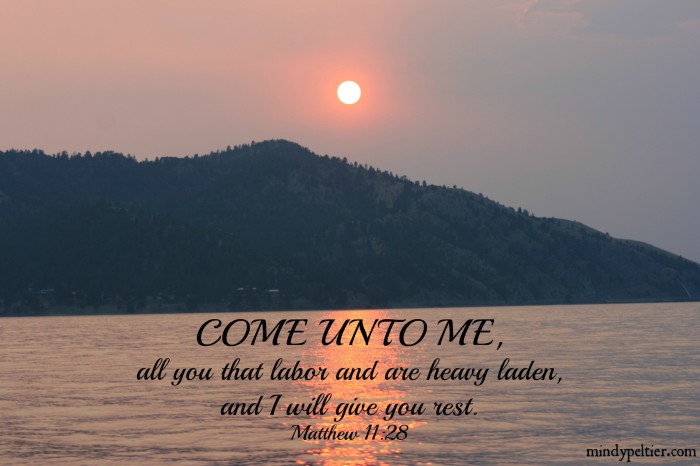 Adults resist spiritual rest the same way a toddler resists naptime. Toddlers fight sleep, imagining their next  shenanigans. We adults fight rest by always saying yes and being enamored with doing instead of being. You know that Martha thing?

Spiritual rest recharges and prepares for what’s next with a willing and happy heart. You know, the attitude we want to see in our kids after their naps?

It’s a two-part deal, we don’t get the rest without coming unto Him. We take the first step by leaving our labor and bringing our burdens.

Weakness in spiritual pain isn’t  giving up, it’s a giving in to the source of all true strength. 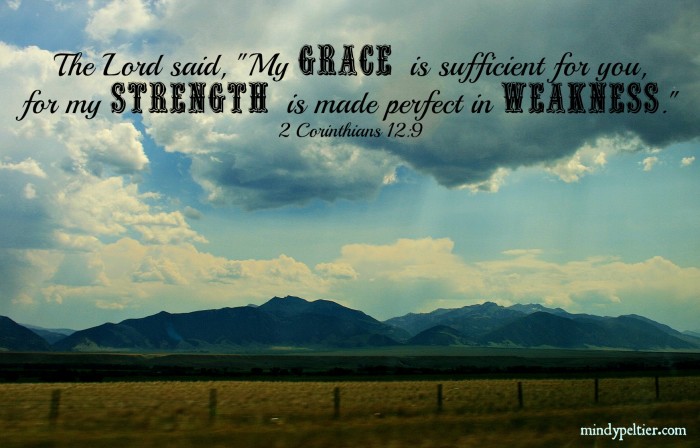 Should we go take that little nap our Father suggested?

Previous Post: « 2016 Is Fresh With No Mistakes In It
Next Post: Look Back to the Future to Set Life Goals »