My blogging was interrupted by a death in the family and the holidays, so joy and sorrow continue to hold hands through my life.

This is the third part of a tribute to my high school classmate and friend, Kari, who died of brain cancer in 2000.  It isn’t her complete life story, she was impacted by many friends and relatives she cherished. It’s a small view into her world through my experiences, which at times are fuzzy with time and grief. To catch up first read:

Not only did Kari force me to go to my class reunion, she forced me to look at the way I viewed my life. My bad memories were nothing compared to hers, but she always found something to smile about. We’d survived high school and became better people because of the adversity. In traveling back to the reunion,  we reconnected with some wonderful people.

The next year Kari fought cancer round-by-round, submitting to  traditional and experimental treatments and medications.She talked like a doctor, educating and advocating her diagnosis and treatment. She vomited, lost her appetite, weight, and her hair. She shook, couldn’t sleep, and suffered mood swings. At times she was so weak she used a wheelchair. She tried anything and everything because she wanted to attend her children’s graduations, weddings, and meet her grandkids.

At some point, my husband coined the theme of our renewed friendship as “No regrets.” Kari was getting sicker and he knew I’d be devastated if she died. We talked on the phone several times each week, exchanged frequent emails, and I made several trips to Helena and stayed with my parents. I’d homeschool four kids and love on a toddler all morning, then spend the afternoons with Kari. I’m so thankful for the loving support of my family and parents during this time.

More than her cancer, Kari talked about her kids. Her kids were the smartest, most gifted, athletic, musical kids in the world. She loved her kids with a momma bear passion. She’d go through each of the  four and list their recent accomplishments. I heard play-by-play of basketball games, concerts, and Scout projects. It wasn’t an innocent “my kids are so perfect” kinda’ blind love, but an honest love that could watch her kids grow, struggle, make mistakes.  She still proudly loved them and always believed they’d be successful and accomplished adults.The trials of her own upbringing became nothing compared to her joy of being the mother of the best kids in the world.

I especially remember a time when one of her kids was struggling in school. He was academically capable, but the school sent home disparaging reports. She clamped on her floppy hat and marched to the school. She drove in a car, but in my mind, she still marched. She got things done. She met with the teacher and listened to her complaints. Then Kari asked for the dates and time periods of the behavior issues. She shook her chemo schedule in the teacher’s face. (That’s how I picture it, anyway.) The dates matched. Perfectly. The teacher knew Kari had cancer, but she didn’t get it. Kari didn’t want her cancer to be the excuse her kids used to misbehave, but she did want it to be the reason the school was more compassionate and understanding.  She felt the pain of her cancer, along with the pain her cancer caused her children.

After her kids, we talked about mine.To Kari, my kids were the smartest, most gifted, athletic, musical kids in the world. She praised them so much, sometimes I saw them differently through her eyes. She talked the same about her sister, nieces and nephews. She knew I took down prayer requests and freely gave me names and needs from their extended family. They had gone through many devastating events, and Kari was concerned about everyone.

When I visited Helena, the afternoons we had alone without our nine kids were made for talking. Not catching up, or bragging-about-our-kids talk, but serious heart and soul girlfriend secret-sharing conversations, of mistakes made and how we overcame those mistakes.

And, we spoke of death. It was the third wheel we couldn’t shake. I tentatively broached the subject and asked her if she minded us talking about everything, even her death. I told her I’d been looking up Bible verses about Heaven.

“Are you kidding? Yeah, I want to talk about it. Nobody wants to talk about death, it makes them uncomfortable.  But, I’m dying.” She said it so matter-of-factly, I stared at her. She was thankful for the many phone calls, cards, emails and the outpouring of support, but said if she tried to talk openly about dying, people often changed the subject. She knew her desire to beat cancer wasn’t enough to win the battle.  Sometimes,  cancer won.

At that point, nothing was off-limits in our conversations, and we fully understood why the Lord had kept me from causing her death years before.  Now, as a Christian who believed the Bible, I had found some answers we’d both been seeking. I’d still be a part of her death, but I wouldn’t be the cause of it. We often rejoiced that He cared enough about our personal lives to cross our paths at the thrift store at a time when we needed each other. 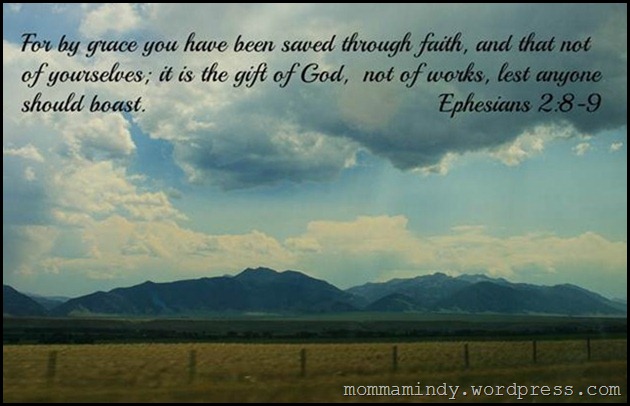 This is a scene shot out the window on my way to Kari’s, with one of the verses we discussed many times. Salvation is a gift given by faith,  not something we earn or deserve.   It’s not a faith placed in our own spiritual thoughts and ideas, but a faith placed in Christ, the author of salvation.

Kari told me once she wanted to die in peace, and had taken on the mental exercise of forgiving those who had wronged her, even if they hadn’t asked for it. Another next step in peace-making is making peace with God. With this in mind, Romans 5 became another passage we discussed.

Romans 5:1 says, “Therefore, having been justified by faith, we have peace with God through our Lord Jesus Christ.”

Interwoven in all our conversations was the desire to make peace with our past, have peace in the present circumstances, and face the future (eternity)  with peace.

Kari made friends wherever she went. People noticed her when she walked into a room, not because she demanded attention, but because she gave attention. Even though they had just moved to Helena when she was stricken with cancer, she’d invested in her community and they invested in her. There were meals, and help with rides, and a fund raiser. Those of us watching from afar were thankful for this input.  Kari received cards and phone calls and was blessed by the outpouring of friends old and new.

The spring of 2000,  she invited me to her cancer support group. She explained the meeting structure and assured me I’d be welcome.

“Oh, it’s great because we talking about everything,” she said, “and sometimes we have Show and Tell.”

“Yea, someone might dig something out of her shirt, wave it around, and say ‘Hey, look at my new boob!’ Another person will unstrap their leg and throw it on the table. It’s pretty cool. We don’t have any secrets,” she explained.

Concerned I’d be out of place, I sat down with a quiet and polite greeting. Kari would have none of that. She introduced me and joked around until I felt connected. Then, they began their meeting. I was horrified by their experiences, but blessed by their camaraderie. At the end, I blurted out, “I wish I could be in a group like this.”

“No, you don’t,” answered one woman. I tried to clarify that I longed for intimate friendships, not cancer, but I gave up. My words were weak compared to truth of the situation. On the way home Kari explained that sometimes they don’t call themselves a Cancer Support Group but a Dying Club.

After that, we both watched the obituaries in the Helena Independent Record, and saw her support group, one by one,  lose their ability to support her.

We prayed for a miracle cure that would keep her signature from becoming an obituary headline.

To read the next post ~ “The Dreaded and Inevitable End”