This is the fourth part of a tribute to my high school classmate and friend, Kari, who died of brain cancer in 2000.  It isn’t her complete life story, she was impacted by many friends and relatives she cherished. It’s a small view into her world through my experiences, which at times are fuzzy with time and grief.
To catch up first read:

Still hoping for a miracle cure for brain cancer, Kari and Tony traveled to Seattle, Washington,  to try their final option available, the Gamma Knife. 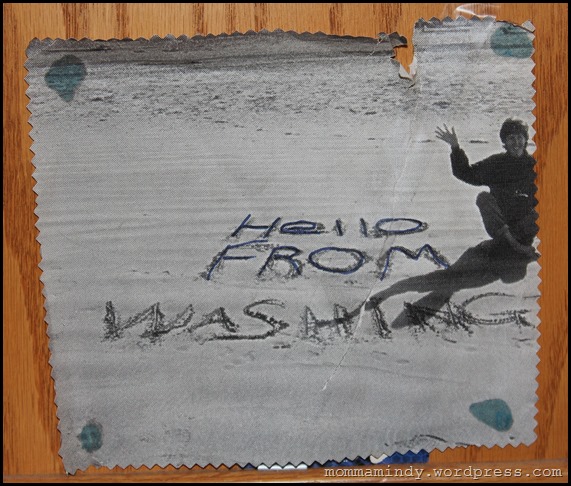 They enjoyed  picking sand dollars at the Pacific Ocean and cruising in a boat through the Puget Sound. When Kari sent this picture through email,  I printed it on plain paper and tacked it up on my sewing cupboard door, where it’s been ever since. I love that smile.

October 6, 2000, she sent out this email to friends and family members. 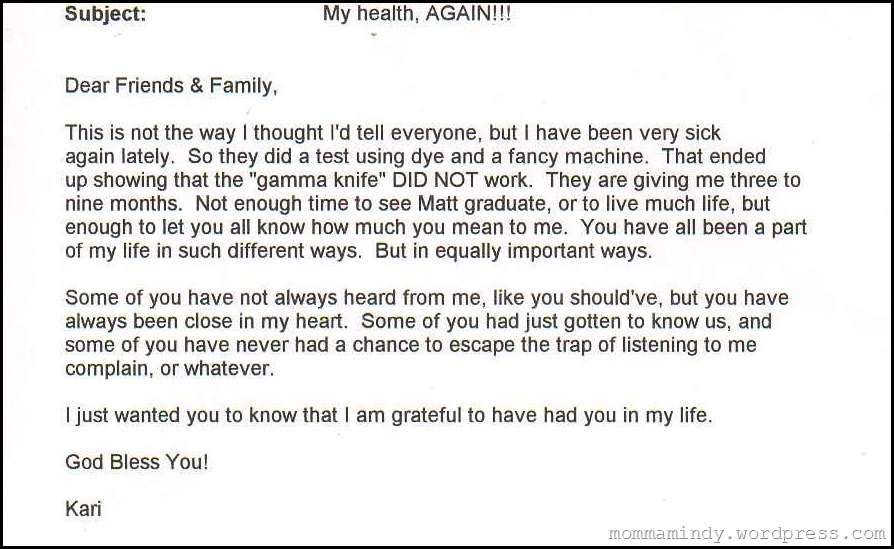 She began going downhill. During a phone call she was telling an animated story about one of her kids in a minor fender bender.  She just stopped talking. At first I thought she’d pulled the phone away from her ear and was talking to someone else in the room, ya’ know how kids always interrupt, but there was no other conversation or sound.

I called her name. Over and over, louder each time, until I was yelling. She finally put the phone to her ear again, and I could hear rustling sounds,  but her mind was blank. When she did speak, she was fuzzy and confused. She couldn’t finish her story and couldn’t answer my questions.  I tried several times, then kindly told her I had to go and told her to hang up the phone. I repeated my instructions until I heard a click on the other end.

Conversations and emails stopped after that. In November her husband called to say hospice was there and invited me out for a final visit. I drove 828 miles with five kids and deep sorrow.

The family was gracious enough to allow me into their personal space by visiting daily in the afternoons.

The hospital bed was in the living room, and Kari was there with a hospice nurse. The kids went to school, came in jumped on the bed for a hug, talked about school, ran off to basketball practice, school activities, and outings with friends. She would ask “How was school?”  or “How are you doing?”  Mostly, she just held tightly to the hand of who was nearest the bed, and said, “I love you.”

In my ignorance, I asked Kari’s husband why they weren’t all spending more time with her, why they were still going to activities when she could die any moment. He was so gracious to answer my question without offense. “Kari and I decided from the beginning that cancer wouldn’t rule our lives. We wanted the kids to live as normally as possible for as long as possible.” Routine was part of their coping. It was a great decision they’d made together ahead of time and made so much sense.  Kari didn’t want her kids to sit around and watch her die, she wanted them to live.

A fighter, Kari hung on for two weeks after I’d arrived. I  read to her from the Bible, often Romans 5,  or would sing a hymn.  I’d heard that even though people lose their ability to speak, they can still hear and understand.  I chatted randomly and  my voice filled up the empty spaces.

In the very end, we were just silent.  She couldn’t speak and I was speechless.  I would just climb into the bed next to her and we’d lay there.  She’d turn to look at me, staring into my heart, and she’d smile.

When we knew death was hours away, I panicked. I didn’t want to stay and actually see her die, but I didn’t want to leave. I knew I would be driving back for the funeral with a classmate, so made the agonizing decision to leave.

I had driven as far as Valley City, North Dakota, my birthplace, when I received a phone call from Tony. Kari had died. 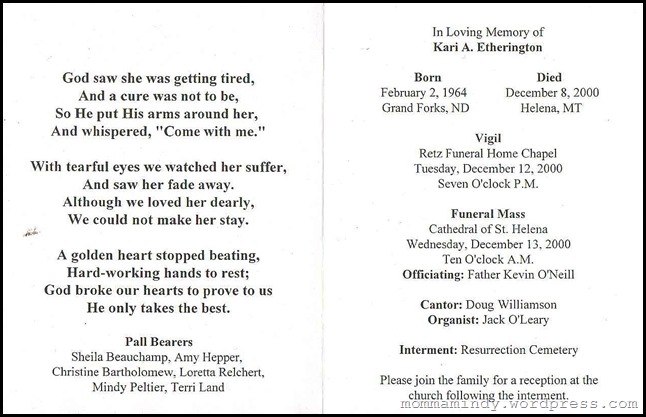 A few days later I drove back to Montana with Janet, another high school classmate.

Life and death are always circular. 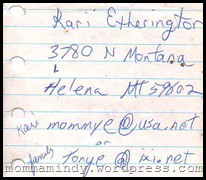 The address she gave me when our paths first crossed?  It’s still her address.

She’s buried right across the street in a large cemetery.

I had always thought that our meeting, that divine appointment in the thrift store,  was for Kari. The Lord wanted to bring me back into her life for her death. But, I’ve been a slow student. In her death, Kari taught me how to live. She taught me to forgive and to smile through my pain. She taught me how to fight my own ten year battle with thyroid cancer.

And that smile I love so much?