It’s appropriate the anniversary
Scott and I celebrate today is the
Silver Anniversary,
because silver is a precious metal refined by fire,
and we’re in the flames.
Silver is the metal of redemption,
the reminder of our purchase by the blood of Christ. 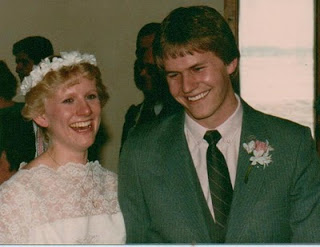 I find it ironic, now, that our wedding was filled with tears of joy.
Instead of traditional vows,
we read marriage prayers written by a godly older man
who still disciples my husband.
Our hearts were so filled with gratitude to the Lord we wept.
Our ceremony was simple, but filled with faith and love.
Were those tears foreshadowing of the type of marriage we would have?
We’re still best friends.
We’re still so in love our children pretend to shudder in horror
frequently yelling things like,
“We’re scarred for life!”
when they catch us stealing a kiss in the kitchen.
But, we’ve had our share of sorrows.
I can’t say more than our share,
because we trust the Lord has written our love story.
Everything is part of his plan.
In the early years of marriage there was no money to celebrate anniversaries.
Once, we went to McDonald’s
and were thrilled to EACH order a meal,
NOT share our fries,
AND order desert.
As the kids multiplied there wasn’t money to buy a meal
AND pay a babysitter.
Since we didn’t want to do either/or,
we usually did neither.
For our fifth anniversary, we were determined to celebrate.
The kids came down with chicken pox.
For our tenth anniversary, we were determined to celebrate.
Our kids had a horrible flu and rash.
For our fifteenth anniversary, we were determined to celebrate.
I can’t remember what thwarted our plans.
For our twentieth anniversary, we were determined to celebrate.
In the throes of  my cancer, we managed one night away.
For our twenty-fifth anniversary, we were determined to celebrate.
For a year we dreamed of cruises and trips.
A month ago, we were still undecided.
Not just undecided, we didn’t feel peace.
We didn’t feel right about going to Hawaii.
We didn’t feel right about going to DC.
Nothing felt right, and we had no peace,
and we didn’t understand why.
We trusted the unction and didn’t book flights or hotels.
On Valentine’s Day, we discovered why the Lord kept us home.
We thank Him for keeping us from making plans
we wouldn’t have kept.
We have no desire to do anything, but fight for an Innocent Man.
Shadrach, Meshach and Abednego were thrown into the fiery furnace,
but found themselves in the presence of the Son of God,
the pre-incarnate Christ.
Like these men, we’re in a purifying fiery trial,
but strongly feel the presence of the Lord.
Today, Scott and I are celebrating the SILVER of our marriage,
knowing the fire will burn off dross and reflect
the beautiful image of the Savior in the perfected surface.
Someday, when the Lord gives relief,
we’ll celebrate the ANNIVERSARY of our marriage.
Share
Pin
Tweet
Email
Print