As our Lord walked this earth, He came in touch with three items that He would encounter again on His day of crucifixion – the scourge, the thorns and the robe.

As He encounters each item, He attacks the lies and the false relgion that it represents.

Each of these items revisited Him in a painful way, yet He died, was buried and rose victorious over the symbols and the sin, and presented a simple way for mankind to shed off all the man-made trappings of religion and approach the God of Heavens for salvation, simply by faith. 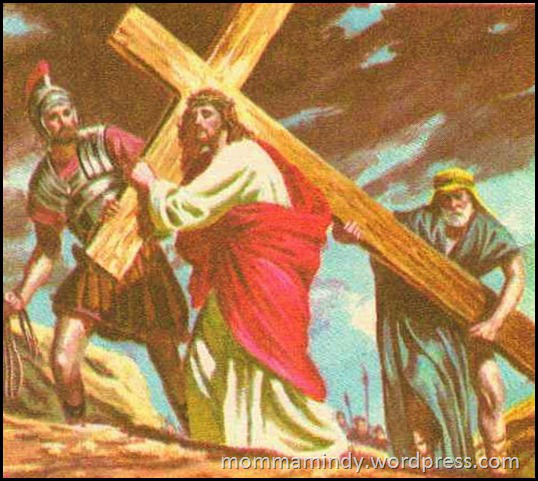 The Lord Jesus watched the religious leaders strutting around the temple in their robes and openly rebuked their love for show. Their pride choked out their faith, and they esteemed the outward symbols and rituals of their religion more than their God.

Their expensive robes, with bells on the bottom to announce their self-importance and their prestigious position, set them apart. But, instead of being set apart as those who loved the Lord and served the people,  they set themselves apart as superiors who abused their power and took advantage of the weak. The garments intended to symbolize consecration, instead symbolized pride.

The Lord Jesus rebuked them in the Temple.

Mark 12:38-40
“Then He said to them in His teaching, “Beware of the scribes, who desire to go around in long robes, love greetings in the marketplaces,  the best seats in the synagogues, and the best places at feasts,  who devour widows’ houses, and for a pretense make long prayers. These will receive greater condemnation.”

Then, there was another robe.

Not a robe flowing around a self-righteous hypocrite, but a robe stained with blood flowing for unrighteous sinners.

Luke 23:11, “Then Herod, with his men of war, treated Him with contempt and mocked Him, arrayed Him in a gorgeous robe, and sent Him back to Pilate.”

Did His flowing robe, glued to His back with His own blood, remind the religious hypocrites of His rebuke for their garments of pride? They could not see He was the fulfillment of all their prophecies, their hopes, their dreams their longings.  They disdained His humble ways.

He warned of  damnation for loving the showy symbols of their religion.

I wonder, when the sun was dying in the west, and the Son was dying on the cross, if the jangle of bells could be heard  in the stillness of the evening, as those religiously robed men walked away from the scene of their making?

Today, are we wearing religious trappings and performing religious ceremonies, without having the heart of faith and obedience demanded by the Lord?

We may not be wearing robes, but we might be carrying titles, offices, or positions of spiritual leadership that we wear as a robe of pride, instead of a symbol of consecration.

We might be trusting in something other than faith in the blood of Jesus for our salvation. If so, then we are throwing the robe of religion for show over the body crucified for our sins.

May we heed the rebuke of the Lord Jesus Christ and  be clothed only in the righteousness of Christ through faith, and the robes of religion for show.  May the trappings of religion fall from us, as we seek after only true faith and the practices in His Holy Word.

If we stray from the Savior and His Word, our  pride and self-rightousness will become a  robe of show that jangles hypocrisy in the ears of those around us.

If we abide in Him, we shall be clothed  in a robe – in a white robe of righteousness, purchased with His blood.