As our Lord walked this earth, He came in touch with three items that He would encounter again on His day of crucifixion – the scourge, the thorns, and the robe.

As He encounters each item, He attacks the lies and the false religion it represents.


Each of these items revisited Him in a painful way, yet He died, was buried and rose victorious over the symbols and the sin, and presented a simple way for mankind to shed off all the man-made trappings of religion and approach the God of Heavens for salvation, simply by faith.

(Read  part one “The Scourge of the Crucifixion”) 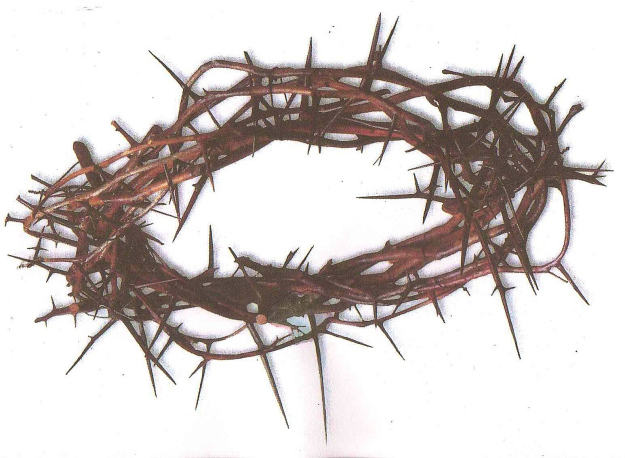 There are several important appearances of thorns in the New Testament. In Genesis they’re introduced as a curse from the fall of man. Thorns remind us of the bitter entrance of sin into the world.  In the New Testament, they are used as a preaching tool for the Lord Jesus and then as a tool of punishment and mockery by the Roman soldiers.

In Matthew 7, the famously misunderstood chapter on judgment, the Lord gives the instruction for judging. It isn’t forbidden, it’s outlined. After you make sure you aren’t guilty of the same sin, you deal with your brother’s sin. The Lord Jesus then instructs on judgment against false prophets. Those claiming allegiance with the Lord Jesus are to be judged for fruit.

The Lord chastised  the false prophets for being fruitless thorns. His words were as sharp as the plant he was preaching about.

A few chapters later in Matthew 13, in the parable of the sower, He speaks prophetically of how the fruitless thorns choke out the Word. In verse 22 He lists the “thorns” as and the care of this world and the deceitfulness of riches. His strong warning is against hearing the Word and not obeying it.

Those thorns show up at the end of his ministry as a cruel reminder that many did not heed His Word.

John 19:2 And the soldiers platted a crown of thorns,
and put it on His head

The soldier’s hands that twisted the thorns into a crown were pierced during their endeavor, but the Savior’s Hands were willingly pierced by nails as He gave up His life on the Cross.

Meant to mock all the Truth the Lord had preached, the crown of thorns instead perfectly symbolized the fruitless life of false prophets. It was the proof that all He had preached was true.

There was no fruit in their cruel acts, but the Lord Jesus bore fruit as He died, was buried and rose victoriously. All that trust in the Lord Jesus for salvation will be brought to Heaven in a glorious harvest of souls.

As the blood dripped from His thorn-pierced brow, were the soldiers, the religious leaders, and the jeering masses reminded of His lessons on false prophets?  Did any remember and quiver at His words about the cares of the world, the deceitfulness of  riches, and pleasures of this life?

Did they see the thorns and tremble that the evil fruit of their hearts and lives was twisted upon His head?

They had heard, but did not obey.

Today, we must not bring that crown of shame, of fruitless religion,  again to the Lord’s brow. If we heed His warnings by hearing and obeying the Word of God, we will be known by our good fruit.