In May 1986, my husband graduated from college
the same weekend we had our first baby.
The Lord led us to Wichita, KS, to teach at a Christian school.
We put down roots so deeply, we still count it as our spiritual home.
The Christians we fellowshipped with greatly impacted our lives.
We left with four children a solid foundation.
We’ve been gone 18 years,
so long I forgot what the state was like,

especially if you live out in the country.

My recent trip back to Kansas brought it all back to me.

(When I travel  I like to compare my old homes to my new home.
I previously blogged about the Midwest and Hawaii.) 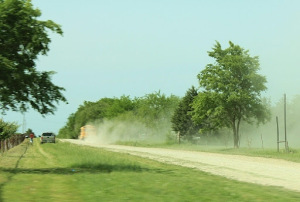 See that white trail behind the school bus?
That’s dust.  Big, huge clouds of dust.
It follows you like a bad habit,
leaving even your teeth and dashboards gritty.
I saw armadillo roadkill.
Another night, an opossum tip-toed across the road in front of us.
Instead of turtles in aquariums and in fancy restaurants,
they have turtles on the road. 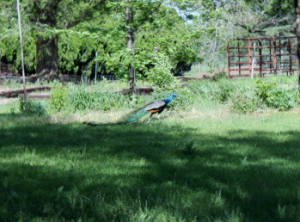 It was a good thing my sister warned me that if I heard a woman scream
“Help me!  Help me!”
I shouldn’t be alarmed.
I guess peacocks have a Hitchcock vocabulary.
The donkeys across the road occasionally harmonized
for an interesting lullaby. 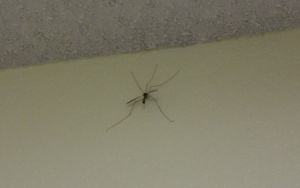 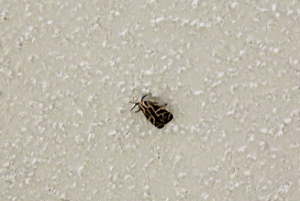 Moths.
They totally freak me out.
They hover in a holding pattern around outside lights,
then kamikaze into your hair when you try to enter your home.
EEWWW!

Of course,  in the PNW we have spiders big enough to carry off our firstborn,
but that’s another blog… 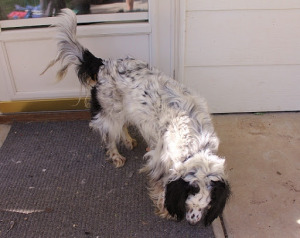 This is a very, very loved dawg.

Ya’, that’s how ya’ll say it in Kansas.
But, is it really a dog,
as they would call it in Seattle,
if it hasn’t been had its toenails painted or eaten an organic dog treat?
She’s never been to a doggie park, either.
(Is this OK, or should I report them?) 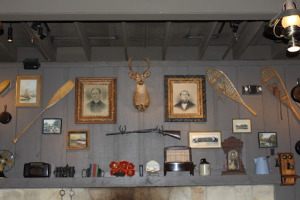 Do you see what I see?
The gun?
The deer mount?
Out in a public place? 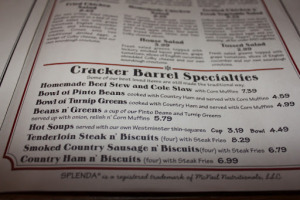 Notice this menu.
No sushi.
Nothing free range.
Nothing offered for our culinary delight after it experienced a  “low stress kill.”
No kiddin’, I actually heard that line in a PNW restaurant once.
I pretended I was coughing to cover my spasmodic laughing into the
organically dry-cleaned linen napkin. 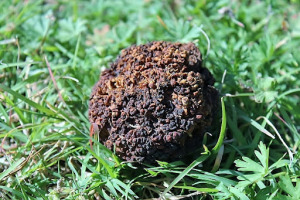 This here is a hedgeapple.
In season they are bright green, like a tennis ball.
Only, don’t kick one when you first move to Kansas,
it’s like kicking a bowling ball.
Ya’, I dun did that once. 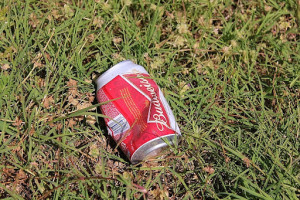 We have some littering in  our area, but not much,
thanks to high fines and years of having a toll-free tattling reporting number. 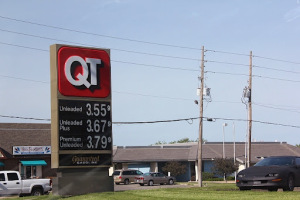 The Quick Trip sign brings back memories of chips and pop,
snacks often ingested after buying gas.
One time we stopped for chips and pop on the way to the hospital.
My son was almost born in a parking lot much like this.
Oh, like the gas price?  I paid $4.19 two days before this. 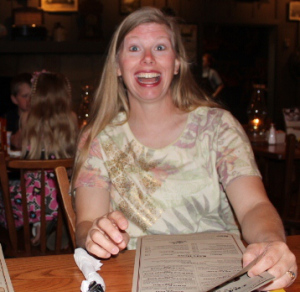 Ya’ don’t be seein’ this in my big ol’ neighborhood either,
my little sistah, LAHRIE.
She followed us down to KS, then ended up staying.
We called her LORRIE growing up,
but ya’ll know how it goes when yuh marry a SUTHERNER.
Kansas is southern to someone from North Dakota,
by the way.
She’s crazy, she eats Beans ‘n Greens,
she argues with me about who prettiest and smartest,
and can out belch me and out-cook me, 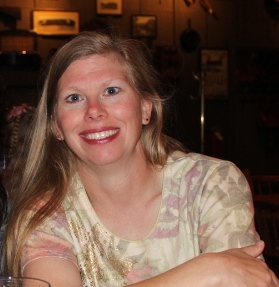 but, she’s one of the things
I miss the most about Kansas.
There’s no one like her in my PNW neighborhood.
I love you, little sis!
Share
Pin
Tweet
Email
Print