When I moved to the Pacific Northwest five years ago, I was astounded with the differences after living in the Midwest the majority of my life. The people, attitudes, food, climate, traffic, values (and/or lack of), traditions, thoughts, clothing…..everything was different. Sometimes better, sometimes worse, but always different.

I fumbled through the new world, planning routes without left turns and not at high traffic times. I learned where to buy the things I needed at the best possible price in a place where the cost of living was exorbitantly higher, and ordered food in broken English to be understood. I cried after being flipped off or honked at again, was yelled at in a grocery store because I made some social faux pas I am still unaware of committing. Someone told me, “Girl, you gotta’ toughen up if you are going to live here.” I needed to toughen up, but I didn’t want to become tough.

I have gradually learned to embrace and appreciate the best of both worlds. Enjoy my comparative journey back to the Midwest. 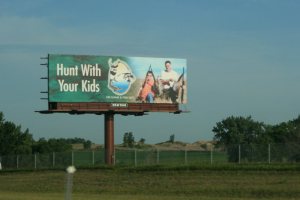 OK, before you get offended, you have to understand, in the Midwest, hunting is grocery shopping. My parents were feeding six kids on a chemist’s salary, so Dad provided meat by hunting deer, grouse, rabbit, pheasants, geese and elk. Mom gardened, canned and froze fruits and vegetables.

The limit for ice-fishing was ten per person, so he would bundle up all the kids that were willing and able and haul us to the reservoir in the Volkswagen camper bus. We would ice fish for hours, until he had a bus load of fish. Then, he would clean them all, sometimes 60 at a time, and prepare them in a smoker he made out of an old refrigerator and an old popcorn popper. We had precious family times shivering over an open hole in the ice and listening to the ice crack, waiting for us and the VW to be swallowed into a watery grave.

In the Midwest, gutting your first deer is as serious as a bat or bar mitzvah for a teenager- it is a passage into adulthood. “Opener” IS a holiday, both for fishing and hunting, whether the wives acknowledge it or not.

The move to the PNW exposed us to delicious, exciting and endless varieties of food. When we were invited to a reputable restaurant for a work event, I was so excited to try something new and exotic. Then, I opened the menu.

I leaned over and whispered to my husband, “This is poor people food! I wanted something GOOD to eat!”

I ordered chicken. The meat poor people buy when they are out of venison and rabbit and smoked salmon. 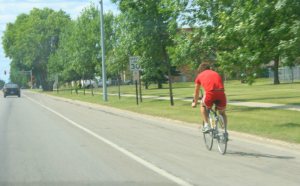 Take serious note. No spandex. No boundary disputes. No attitude. No comment needed. 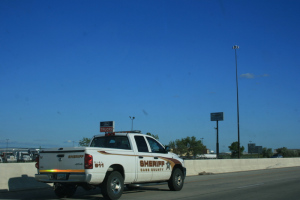 Four wheel drive pickup for the sheriff, appropriate for ND with six to nine months of mountains-of-snow-on-the-ground winter. 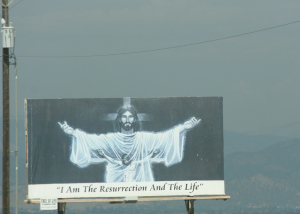 The state of Washington diligently practices separation of church and state. They want the Christian church kept out of the state. 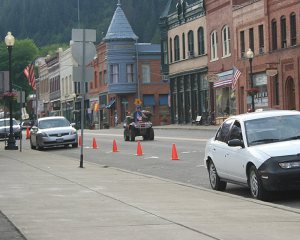 Ever see a four wheeler drive down your main street? First, he stopped at the local grocery store we were shopping at, bought orange juice, milk and a Sunday paper then followed us to the gas station where he filled his tank. Then, he drove off into the sunrise.

When was the last time you saw the Ten Commandments standing so tall? Hmmm, is that a public building behind the two stone tablets? 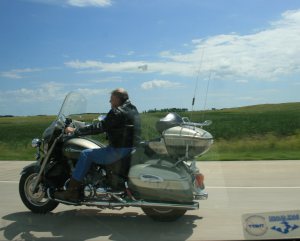 No helmet laws. Most of the bikers across Montana and North Dakota didn’t even wear the leather jackets, just jeans and t-shirts. Clothes flap in the wind a lot more than leather. Besides, I would be a little nervous to drive unprotected. After all, if you skid, there are no cars on the road to stop you for miles and miles and miles and miles. OOH, I feel the burn just thinking about that road rash. 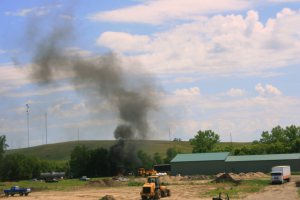 We spotted the black smoke miles before and were very concerned. We expected to hear sirens and see emergency vehicles flying down the road. We got closer and closer, still no fire trucks. Someone was just burning something. Maybe because there are less people to breathe the toxic air, they don’t care. Ya, you betcha, I dunno. 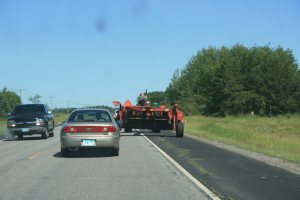 Have you ever been stuck behind a tractor? Especially one who seems to find it amusing to have a trail of cars behind him? Do you think he bragged at the grain elevator over a cup of grainy Folgers the next morning, “Hey, I got a back-up of six cars yesturday, fer shur, how many didju git?” 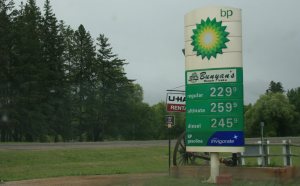 Check out the price of gas! Would it be worth it to drive across the border just to fill up?

We became tired of waving, smiling and greeting nearly everyone that passed us on the highway, on a road or in a building. At one point, my husband yelled in mock exasperation, “I am NOT waving again!” My son noted that everyone in the Midwest is your next best friend.
Then, we returned to WA. Thinking we would enjoy the relief from over-friendly-stimulation, we settled back into our neighborhood. Then, yesterday, my neighbor yelled at my kids – again. They were giggling in the backyard in the early afternoon. I couldn’t even hear them from the house. And, only two out of six were out there, how loud could they have been?
Then, I repented of my prior attitude. Midwest, I promise to wave and smile at everyone I see while on vacation next year.
In fact, I might even start practicing that again, now.
I’ll start with my PNW neighbor. Fer shur.
Share
Pin
Tweet
Email
Print