Today people tattoo the name of their first crush on their bodies. When I was in high school, I embellished the name of my crush on a meatloaf.

I always thought it was a blessing to grow up in The Olden Days when my stupidest moments in  high school weren’t broadcast through social media. The grapevine probably enjoyed a few laughs at my expense, but without social media, it soon died down.

They were published in the column I wrote for the local newspaper. 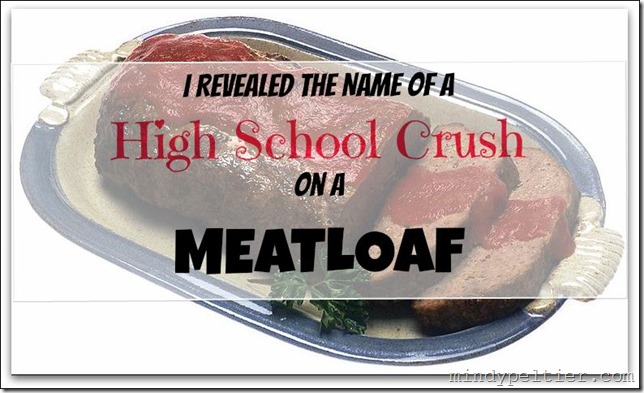 My teenage writing career had been jumpstarted by llamas, then gained momentum when I was given my own column.   I moved onto more eloquent subjects, like how I revealed the name of my current high school crush  in my meatloaf and the disastrous day I had to wear a pair of home-made red bibs to school. They were my sewing project for Home Economics and to get a grade, I had to wear them to school.

I’d spent weeks sewing on this crazy red corduroy trying to make them fit like the Lee Bib Overalls that were in style.  The day was a miserable disaster, but it gave me column fodder.  Since I earned $2.30 an hour, Carter had raised minimum wage  to $3.35 but word hadn’t reached North Dakota yet, I probably made $2.30 on this column.

Some of the mistakes honestly were mine, some were added by an overzealous typesetter.  Her long nails clicked on the keyboard and she clicked her tongue in unison when she found a mistake. She rewrote my words as she typed, adding commas and changing tenses.  I was saved only if one of the layout women caught her corrections and sent the column back.

Sometimes I worked late and typed up my own work to avoid her help.

I still burn toast and have sewing ambitions that exceed my abilities, but there’s hope for my writing.  I  have learned the value of getting my work properly edited.

Some people over 40 are thankful they grew up before social media could broadcast their embarrassing teenage moments.

Some people bring up those embarrassing high school moments on social media decades later after the grapevine has definitely died.