The greatest human need is love. Most people would rather be loved and hungry, than full and alone.  However, there’s confusion when it comes to defining and identifying love.  Even country and rock singers can’t agree about what love is.

We’ve all heard the catch-phrases people use for giving heart advice, but some of those glib sayings need to be debunked. 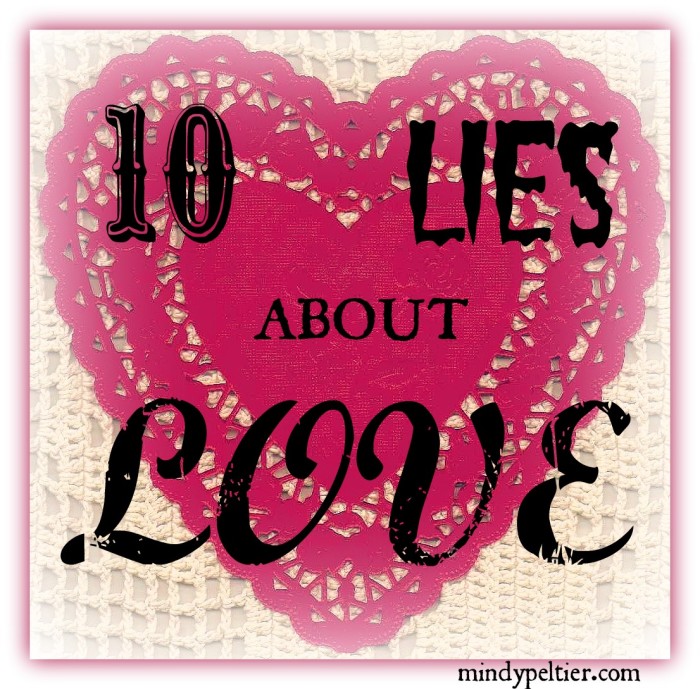 Next to “I love you”  three very important words in a relationship are “I am sorry.” Love is admitting you’re wrong and  saying you’re sorry.  Every relationship has problems, how you handle the problems defines your status.  When you shove little squirmishes aside and don’t complete the conversation with forgiveness, it gets set aside as ammunition.  Eventually when you’ve stocked enough ammunition, you start a battle.  That’s why little things set off a big fight.

“I’m sorry” and “I forgive you” draws a line in the sand that the issue is finished and cannot be brought up again.   “I’m sorry” heals the past, the present, and sets you up for a happier future.

2. If you love something, set it free; if it comes back, it’s yours. If it doesn’t, it never was.

This was the dating wisdom of the ages when I was in high school in the early 80’s. “Setting free” indicates captivity.  Love is captivating, but it isn’t being held captive. It also implies ownership.  Commitment is not the same as ownership.

“Set it free?” What does this really mean?  You’re free to date others?  You don’t spend time together for awhile?  So, you set a guy free, he dates ten other women, do you really want him back?

It wouldn’t work for a puppy.  If you set him free, don’t feed him, don’t train him,  and don’t protect him, he will find someone else who will. Shouldn’t we treat human relationships better than pets?

When someone truly loves you, they won’t have the desire to be set free, because they won’t feel in bondage from a committed relationship.

If you have to set love free to prove it’s real, it’s not.

Obviously, duh, this is the rule  for magnets, not people.  Hubby and I were told our marriage wouldn’t work  because we’re both extroverts.  Seriously?  As if that’s the magical  rule of One Thing Guaranteed To Make A Marriage Work.  I wanted to marry an extrovert.  I love conversation.  I love animation.  I wanted someone spiritually strong and vocal.  I didn’t want to hear only my voice bouncing around the walls of the home, nor did I want to overpower my future husband.

Our attraction came from having the same Biblical convictions, life goals,  and beliefs about raising a family.  We were headed down the same path in all the main areas of our lives.  It’s just a noisy path when two extroverts are traveling together. And two introverts can be happily married, of course, walking a much quieter path.

“Opposites attract” is true for magnets, not marriage.

If you’re talking about dancing, this is true. But, it can be used to blame both people for a divorce.  The blame can’t always be shared equally.  When a husband has an affair, you’re basically pointing a finger at the wife and implying, “Well, she must have done  something  to send him to another woman’s arms.”  Probably,  that something was being a normal wife. The failings of a woman whose husband is having an affair are usually no different than the failings of those with faithful husbands, and certainly not worthy of the finger pointing.  Even is a woman is the worst wife in the world, an affair still is never, ever, ever her fault.

The truth was spoken by Mike, whose wife divorced him after he became a Christian. “It takes two to make a marriage, but it only takes one to make a divorce.” His Divorce Care Bible study is filled with people who wanted to work on their marriage and avoid divorce.  Their spouses didn’t.

It takes two to tango in dancing, not divorcing.

In choosing a spouse, it is wise to marry someone who aligns with your convictions, especially in areas you where you aren’t willing to compromise. But in other relationships, you might not be in such close alignment.  Love  for others isn’t based on intellectual and spiritual agreement on your  A – Z  list of beliefs and practices.   You can disagree with a person and still love them completely. Love agrees to disagree.

Parents know that children can make life choices contrary to the Bible and their upbringing.  You don’t agree, but your love doesn’t stop. Siblings may end up living lives  contrary to yours, but it doesn’t mean the relationship has to end. Love is  not a commodity given in approval, it’s a commodity given.

Our Heavenly Father demonstrates that kind of love.  John 3:16 doesn’t say, “For God so loved the people that loved Him,” or “God loved the righteous.”  God loved the world. An example of the love of an earthly father example is the prodigal’s father.  His love didn’t change or diminish over time.

Love is a commitment you made to that individual, whether through marriage vows, giving birth, being born into the same family, or through  friendship.

The only thing time does is age you. It gives you wrinkles, gray hair, and age spots. It doesn’t make you automatically wiser, kinder, or more loving.  Yes, love does grow, but not automatically.  Love is a garden.  You need to pull the weeds, till the soil, add some fertilizer,  add new plants, prune some, pull out the dead ones.  It needs constant upkeep.  A relationship left to time alone will turn out the same as an untended  garden, a wild mess. 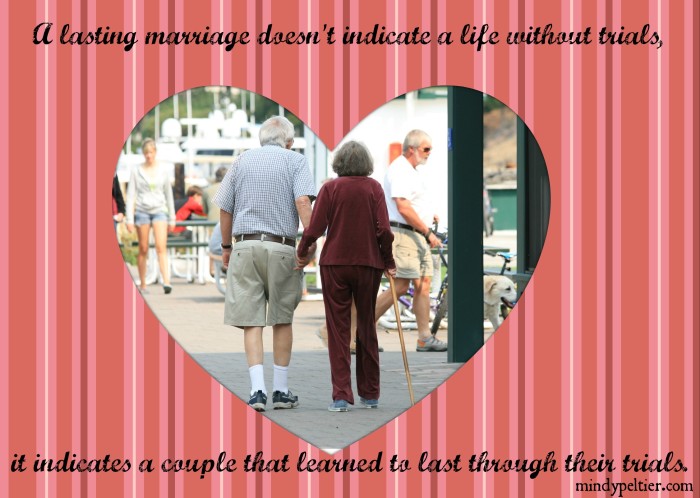 7. A lasting marriage is a perfect marriage.

People assume that those couples that are holding wrinkled hands in their final years have had a perfect marriage. If they’re human, they’ve made mistakes and gone through trials.  They disagreed and fought.  They lost people they loved.  They suffered illness.   A lasting marriage doesn’t indicate a life without trials, it indicates a couple that found a way to last through their trials.

If you’re blind to the faults of a person and refuse to take advice about their character from those that love you and know you, it  isn’t love. You’re looking for a relationship for the wrong reasons and maybe with the wrong person.  Be discerning before a marriage.  The reasons you are looking for love in all the wrong places, should be dealt with before you add another heartache to your life.

There’s also a big difference between accepting a few bad or annoying habits and overlooking serious mental or spiritual deficiencies.  Saying “I do” doesn’t make a man a better man. You won’t change him.  You can’t change him.  Men change by responding to the Holy Spirit.

As Christians, we are called to encourage and rebuke other Christians in a loving, Biblical manner,  including spouses. If we let someone continue in sin because we don’t want to point it out to them, that isn’t love, either.  Love sees faults, tries to correct faults, and seeks help, if needed, to help someone overcome faults.

Despite how novelists describe love, it isn’t always butterflies, tingly sensations when you accidentally brush against their muscled arm, or trembling when he calls your name. If love was based on feelings alone, no marriage would stay together.  We all know how easy it is to love your husband one moment and want to smack him with the shoes he left out the next moment.  We’re fickle people with fickle emotions.

Hubby and I discovered one day during our engagement we didn’t “feel” in love.  At that point we determined to base our relationship on commitment not feelings.  From the example and advice  of older couples with marriages we admired, we learned the infatuation stage would mellow and deepen into an indescribable love.

They were right, and I’m thankful our marriage didn’t have to survive 28 years on the shallow love of my youth.

True love is a commitment, not a feeling novelists describe.

10. Love comes from our heart.

A human heart is not the source of love, love is birthed in the heart of God.  He doesn’t just give love, God IS love.  He is the only source of true love.

Our love  isn’t automatic.  That’s why we’re told to “love your neighbor as yourself” because we really love ourselves. We have to learn to love others.  And, when love fails it isn’t because Love Stinks, or Love Hurts, it’s because true love wasn’t offered.  Someone offered a poor substitute. 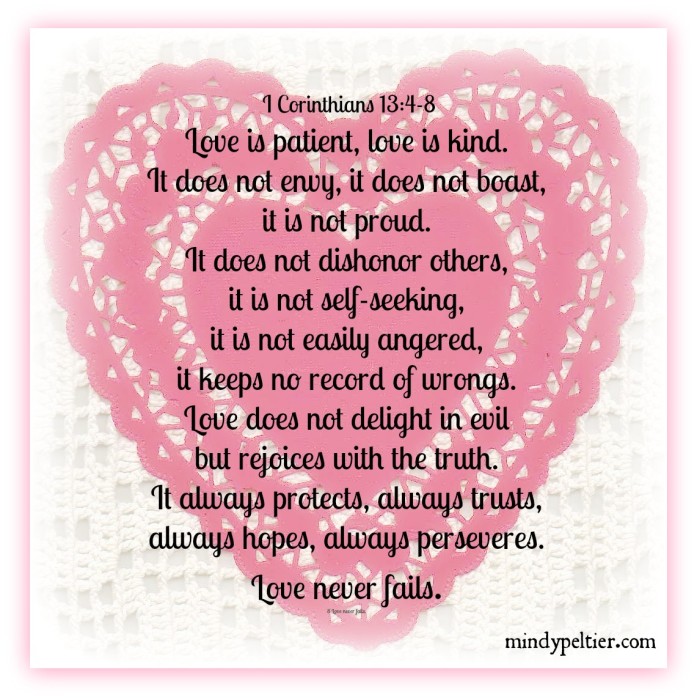 Previous Post: « I Revealed the Name of a High School Crush on a Meatloaf
Next Post: I Do Not Want to Grieve Quietly »