I was so well-prepared for Thanksgiving I had time to make a Thankful Garland for the fireplace. After all, I’d been planning for nearly a year since my inlaws aren’t able to visit very often. The house was decorated, the meal was planned, the groceries were purchased, the house was clean.  It was nearly, practically perfect.  We just had to pick up Gramma and Grandpa from the  train station.

Good thing we checked first.  Instead of arriving on the West Coast at 9am, they were still stuck somewhere in Idaho.  They were not going to be into Spokane until around 6pm, then they would have to take a bus for the rest of the journey.

I had a full day to myself.  So, I did what any woman would do, I found something to do, thanks to Jen, who created the original Thankful Garland.

My dear hubby drove his 4×4 Jeep down the icy streets to Michaels. 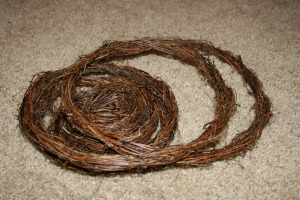 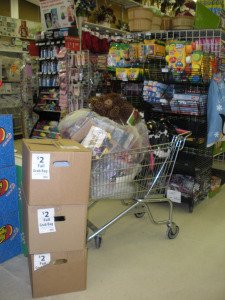 …and came out with this.
That’s what you get for shopping after a major snow storm, when everyone else is at home. Michael’s was selling out all their fall clearance for $2. I bought three heavy boxes and three very full bags.
When you follow someone’s ideas, there are certain areas you shouldn’t deviate from. Jen recommended Gorilla tape. I thought I could work without it. Maybe I’ll get some of this tape for Christmas.
The longer I worked trying to get my garland to stay along the edge of my mantle, the less thankful I was. 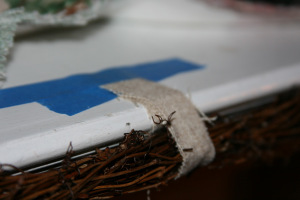 I tried taping loops of fabric underneath my mantle cloth.
It didn’t work. 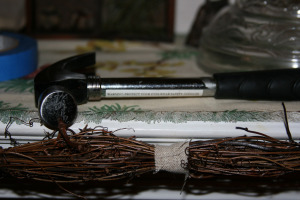 I tried nailing  the little cloth slips to the mantle.
It only worked on one loop.  The rest kept bouncing up.
I was wondering if I should have tried to straigthen the grapevine
before using it. 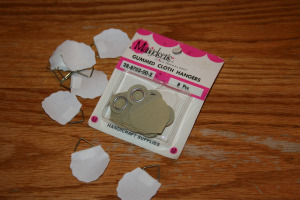 Then, I remembered these vintage babies in my craft room.
Yea, they’re lick-‘n-stick. How old-fashioned are these? But they worked. I licked and sticked a row of them along the top of the mantle, taped them down for extra good measure until they firmly dried. Thin wire was threaded through the metal triangle and around the grapevine.
It worked!
I won’t tell you how long it took, or how many times I checked back to the other blogs, to get ideas for making this work. I was almost going to rename my garland THE CRABBY GARLAND.
After I realized I did not buy any floral sprays in my bags, my dear hubby drove me back to Michael’s to spend $4 on two more humongous bags  filled with fall foliage.
Yea, he’s a keeper.
Little floral sprays were tucked along vine.  Jen made beautiful roses and put glitter on her clothespins. That might have to wait until next year.
Leaves were cut out from scrapbook paper using this template, and placed in a wooden bowl with tiny, wooden clothespins and a permanent marker.
We began filling out  the leaves with thankful thoughts. By now, I had renewed my thankful heart, after apologizing to my hubby for getting crabby. 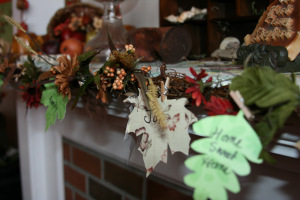 It turned out just fine, and didn’t fall into the fire. 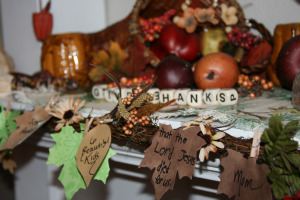 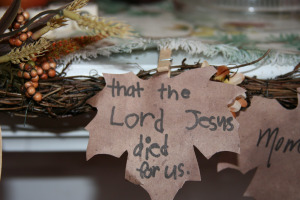 Meanwhile, my in-laws were on a nightmare journey. Because it was so cold throughout the entire midwest, the trains had to move slower than usual.  Much, much slower.  For hours of the trip they were behind a freight train going 10 miles per hour.  Since train engineers can only drive for 12 hours at a time, they repeatedly ended up waiting for a new conductor.  If he was three hours away, his work day began when he jumped in his car to drive.  By the time he arrived at the train, he could drive the train 9 hours, when his shift was done, they waited for a new engineer to drive in from another city.

Toilets froze up and blow torches were applied.  Food supplies were low.  The train kept chugging and chugging along.

The bus ride was worse.  They ended up having four drop-off/pick-ups, so instead of a three or four hour interstate ride, it became nearly a 9 hour drive into small towns and smaller roads.

Yes, at one point the GPS led the bus driver into a small road where he couldn’t back up.  He had to wake up the owner of the house at the end of the road and have him bring out a flashlight and help him get the bus back on the road.  Then, the people they were supposed to pick up in this small town way up in the mountains in WA, were not there.

Meanwhile, hubby and I were waiting in our car at the locked Amtrack station where they were supposed to arrive at midnight.  Ever try to find a bathroom open at 2:30am?  Even if a business is open, their policy is to NOT let anyone use their bathrooms because of the kind of people that are usually on the streets at that hour.  By 3 am, I was looking like one of those people.

But, their bus finally arrived and we finally got a few hours of sleep before Thanksgiving Day officially began.

But, my home and heart were ready,
complete with a Thankful Garland.
Share
Pin
Tweet
Email
Print