There is an old saying, “Many hands make light work.”
This is true.
There is a Momma Mindy saying, “Many hands make heavy work.”
This is also true.
A dual income mother of two kids once very nicely accused, “They say parents just have a lot of kids to do their work.”
The Lord gave me a gracious answer. “Did it ever occur to you that if I didn’t have so many kids, I wouldn’t have so much work to do?”
In a big family there is a lot of work to do, so everyone pitches in.
That’s part of the blessing,  kids helping out.
That is part of the trial, too, kids helping out.
Mothers might redefine the word “help” when kids step into the laundry room.
I’ve had white things turn pink, my clothes shrunk until they fit the baby of the family, and stains set in because they were thrown into the dryer.
I have also had the help of a pen exploding in the dryer. Yea, it made it through the washer just fine, but the heat and the tumbling of the dryer caused an explosion.
To remove the hurled blue spots,
I tried alcohol,
I tried finger nail polish remover,
I tried Goo Gone,
I tried De Solve It –
nothing worked.
I let it dry for a few days, then tested it with a load of towels, and it was fine. A few years later and the dryer is still going strong, blue streaks and all.
My recent help occurred when someone eagerly and quickly slammed the dryer shut and caught just one little corner of a shirt. It mangled half the load together in a tangled, twisted mess. It gave a new meaning to the words… 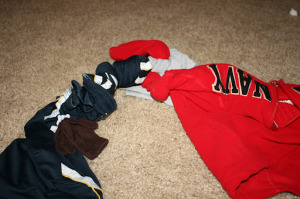 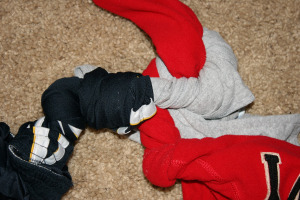 and SHOUT!
(I didn’t shout, but the kid who opened the dryer did – in surprise!)
When those many hands try to make light of the heavy load of work they’ve created, I walk a tightrope.
I can’t fall onto the side of criticizing them so much they stop trying.
I also can’t fall onto the side of thanking them so much,
I fail to point out the errors they need to overcome.
So, I give encouragement for their service, gently point out their errors, and sincerely thank them. Then, I hide my laundry from their help.
I think I’d rather have their help in the kitchen.
Share
Pin
Tweet
Email
Print