In my last blog, I talked about my Gramma,
saver of the thumbtacks.
Gramma and Grandpa lived in a small town in
ND and raised three children together.
If they needed something
but didn’t have the money,
they didn’t buy it,
even if it was food they needed.
The government never bailed them out,
bought them clothes, food or shelter.
They planted gardens,
sewed clothing from feed and food sacks,
hunted, fished and bartered.
If my Grandma had a scrap of fabric, it went toward a quilt.
If she had more than an inch of yarn,
it went towards an afghan.
If she shortened a slip,
she would carefully roll up the trimmed fabric
and tie it with a bit of leftover thread.
My ancestors could pinch a penny so hard,
they made a booger come out of Lincoln’s nose.
They epitomized the saying,
Waste Not Want Not.
So, when I’m crafting, the generational burden of frugality weighs heavily upon me.
Decorating for Grace’s Graduation was a challenge. 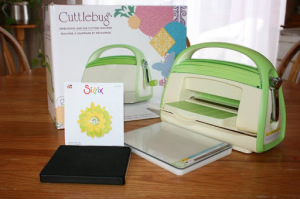 I knew I wanted to use my new Cuttlebug, an embossing and die cut machine
I purchased  this year with a 40% off coupon.
After Grace finally chose her colors,
I purchased sheets of 12×12 scrapbook paper.
Yea, they were on sale.
4/$1
Gramma would be proud.
So would her thrifty daughter, my mom Mary. 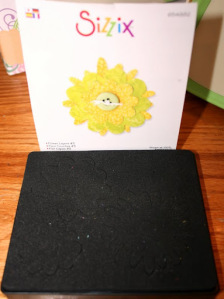 I cut the sheets into the proper sized squares,
and began rolling them through the Cuddlebug
using this Sizzix template. 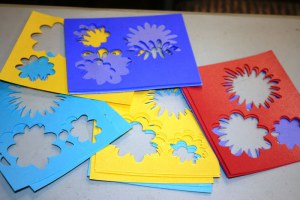 This was left.
I really, really, really wanted to throw the paper away.
I just couldn’t.
So, I didn’t.
Ya’ know, that whole “roll over in her grave” thing? 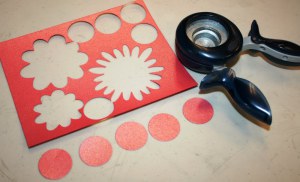 I stared at the scraps of paper for a long time,
knowing there were still a lot of use left.
I also knew sometimes I save and save and save stuff,
but don’t use it.
I dared myself to boldly walk to the garbage can
and throw the scraps away.
I couldn’t.
So, I didn’t.
I took out the 1 inch hole punch,
and punched away. 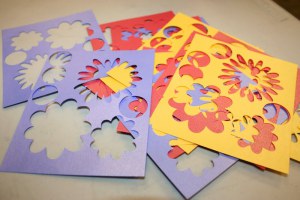 Then I had a pile of scraps I thought I might justify throwing away.
But, I couldn’t.
So, I didn’t. 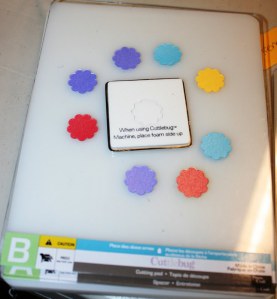 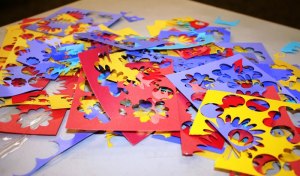 Then I had a pile of scraps I thought I might be able to justify throwing away.
Surely my Mom and Gramma would be satisfied with my frugality.
But, I couldn’t.
So, I didn’t. 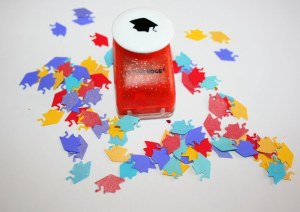 I pulled out my mortarboard punch and began punching away. 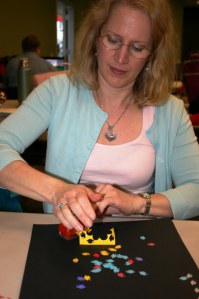 At this point, my blogging/homeschooling/Hippy/ Mommy friend,
Cookie Baker Lynn,
decided to help me out.
I think she just wanted to see me finally throw the paper out.
When we punched a bajillion brightly colored mortarboards,
I forced myself to do something my people just don’t do.
I
threw
the
scraps
out.
Every smidgeon of brightly colored paper
was tossed into the huge garbage can.
I could.
So, I did.
(And just wait until I show you
what I made with all those
flowers and
circles and
mortarboards…)
Share
Pin
Tweet
Email
Print