Sometimes, my husband is a little ….
…ummm…..
how do I describe him?
Let me count the ways…
Silly?
Crazy?
Entertaining?
Free spirited? 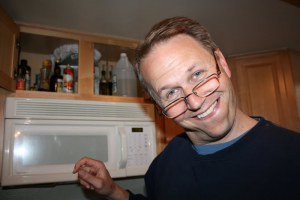 Mr. P is indescribable and undefinable.
But, I fell in love with him, and the kids like having him around, so that makes him a keeper.
And when he helps in the kitchen and acts silly, it makes it even better. 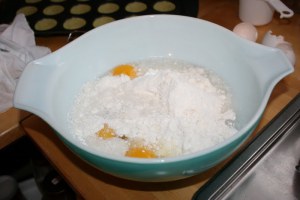 Yea, that’s my Chex bowl, but it works for cupcakes, too.
Much to the chagrin of all my food-blogging friends, I used box mixes for making cupcakes for Graduation. And, I’m not hiding that fact.
I was running out of time and energy while planning and preparing. Hubby knew  was a little stressed. He doesn’t like me stressed. Only he calls it crabby.
Ouch.
He became a man of action. He ripped into my box mixes and started throwing ingredients together. When he started schlepping the dough into my color-coordinated mini cupcake papers, I was a little worried.
I wanted the cupcakes to be the perfect size for decorating and displaying in my cupcake holders.
My OCD doesn’t like lopsided cupcakes or drizzled splotches on the edges of my muffin pans.
I tried to give him a few pointers, and he politely pointed me out of the kitchen.
Nobody likes a backseat  cook, especially Mr. P. 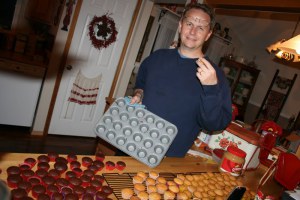 I knew it!
Without my advice,
my tips,
my ideas,
my superior way of doing things,
they turned out fine.
That always happens.
Sometimes wives don’t have enough confidence in their husbands. We want help around the house, but only if our husbands do things our way.
(OK – you all know I’m talking about myself, but nobody wants to be wrong alone, so I’m inviting you along.)
It takes a mature woman to
let go
and let her husband
help
in his own way.
YES, it still IS help if your hubby doesn’t do it YOUR way.
I ended up eating humble pie, 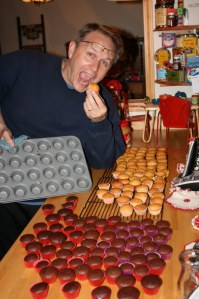 while Mr. Scott sampled one of his “perfect” mini cupcakes. 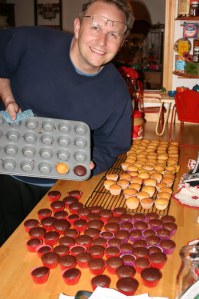 Chocolate and vanilla cupcakes, ready to go into the freezer to decorate the afternoon of the open house.
They  were cooled and layered with waxed paper in Tupperware containers. They can be frozen for several months. I used about half for Graduation, half for company desert a few weeks later. 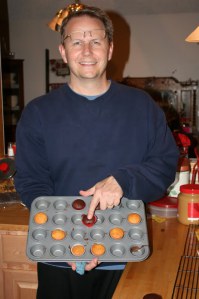 To prove he’s not gloating over his success, he made a smiley face for me. And, he made me smile.
The day of our celebration, I took the cupcakes out of the freezer. I had purchased butter cream frosting from a party store with a cake decorating kiosk in the back.
It was the same price as the tubs in the store, but tastes delicious! I used the gel food colorings to make the frosting pink, purple and yellow.
A large swirl tip was chosen, the bag filled, and with a quick, continuous swirl, the cupcakes were frosted. No perfection allowed in my house anymore, I have to choose the more red-neck affirmation of “get ‘er dun!” 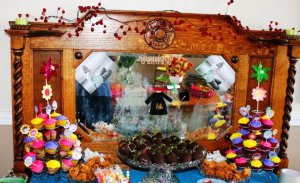 I didn’t get a close-up of the cupcakes, so click on the pic to enlarge and see them more clearly.
Thanks to Mr. P’s uncoached help in the kitchen, the cupcakes were a hit.
We “got ’em dun!” ~
his way.