I saw my first big city when I was seventeen-years-old.

My high school was in Langdon, NorthDakota, a town with a population of 2,335 people after my family of eight moved there. There was a four-way stop on main and no need for a taxi or any public transportation.

For those of you who don’t know this little factoid, Minneapolis is the co-joined twin of St. Paul, thus the nickname of “Twin Cities.” The total population of that area in 1980 was 2,255,502. That’s over two million people, people!

The entire population of North Dakota in 1980 was 659,524. There were more people in that metropolis than my entire state.

Because I’d grown up in Helena, Montana, with a population of 23,938 in the 70’s, at least I was actually more experienced than most.

I’d ridden in an elevator and an escalator.

I recorded my thrilling big city experience in the column I wrote for the local newspaper. 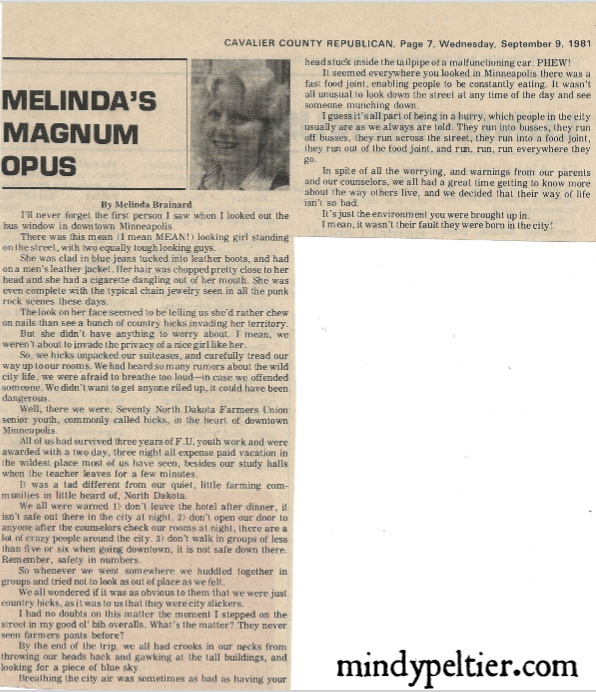 My First Trip to the Big City

I’ll never forget the first person I saw when I looked out the bus window in downtown Minneapolis.

There was this mean (I mean MEAN!) looking girl standing on the street with two equally tough looking guys.

She was clad in blue jeans tucked into leather boots and had on a men’s leather jacket. Her hair was cropped pretty close to her head and she had a cigarette dangling out of her mouth. She was even complete with the typical chain jewelry seen in all punk rock scenes these days.

The look on her face seemed to be telling us she’d rather chew on nails than see a bunch of country hicks invading her territory.

But she didn’t have anything to worry about. I mean, we weren’t about to invade the privacy of a nice girl like her.

So, we hicks unpacked our suitcases and carefully tread our way up to our rooms. We had heard so many rumors about the wild city life, we were afraid to breathe too loud, in case we offended someone. We didn’t want to rile anyone up, it could have been dangerous.

Well, there we were. Seventy North Dakota Farmers Union senior youth, commonly called hicks, in the heart of downtown Minneapolis.

We survived three years of Farmers Union youth work and were awarded a two-day, three-night, all expenses paid vacation in the wildest place most of us had ever seen. Besides our study halls when the teacher left for a few minutes.

It was a tad different from our quiet, little farming communities in little heard of North Dakota.

We were all warned:

So, whenever we went somewhere we huddled together in groups and tried not to look as out of place as we felt.

We all wondered if it was as obvious to them that we were just country hicks, as it was to us that they were city slickers.

I had no doubt on this matter the moment I stepped on the street in my good ol’ bib overalls. What’s the matter? They never seen farmers pants before?

By the end of the trip, we all had crooks in our necks from throwing our heads back and gawking at the tall buildings and looking for a piece of blue sky.

Breathing the city air was as bad as having your head stuck inside the tailpipe of a malfunctioning car. PHEW!

It seemed everywhere you looked in Minneapolis there was a fast food joint, enabling people to constantly eat. It wasn’t unusual to look down the street at any time of the day and see someone munching down.

It’s just the environment you were brought up in.

In spite of all the worrying and warnings from our parents and counselors, we all had a great time getting to know more about the way others live, and we decided that their way of life wasn’t so bad.

I mean, it wasn’t their fault they were born in the city!

My Move to the Big City

Mr. P and I were happily married and had six adorable children. We dreamed of raising our kids in the country with chickens, a cow, a pig, and a garden. Those years in Future Farmers of America and Farmers Union had to account for something!

Instead, we found ourselves in Fargo, ND. You know, the good job and all that adult stuff.

I exchanged my farm dream for my dream house. It was an older two-story home with curved arches, a library, and built-in bookshelves in every room. Our house sat on a quiet cul-de-sac surrounded by acres of grass owned and mowed by the university.

In August we moved in and happily spread ourselves into every inch of 3,000 square feet. I told my husband when I die to doze the house and bury me with the house.

My husband brought home shocking news in September. His boss was considering relocating us to Seattle. I ignored that possibility and stripped wallpaper from six rooms and repainted the entire house.

Mr. P’s boss confirmed the news in May. My husband’s job would relocate to Seattle with or without him. I cried and prayed for a week. Then I paid the price Ruth paid when she said, “Where you go I will go, and where you stay I will stay. Your people will be my people and your God my God.”

We repacked our belongings and moved out before we celebrated our first year anniversary of ownership.

The adjustment to big city living was huge. This time I didn’t have chaperones, a bus driver, or a group of friends to help me navigate. I wasn’t a curious, wide-eyed teenager, I was a frantic, wide-eyed adult responsible for six children.

I learned if you accidentally budge in line people yell at you. Someone said, “You have to toughen up if you’re going to survive here.” I would toughen up, but I wouldn’t adapt that mean spirit.

Traffic was so horrendous a trip to the grocery store could mean two near-accidents. Allowing our kids to drive to school and church events caused premature gray.

I adopted this motivational mantra, “If women could do this in a covered-wagon, I can do this in a Suburban.”

Most weekends we headed east to explore the mountains, rivers, and waterfalls. We never planned, we piled into the Suburban, bought snacks, and started driving.

When we felt brave enough to face the traffic we hit the city. We learned how to merge across four lanes on I-5 to Mercer Street exit to get to Seattle. Conquering the traffic meant we enjoy our favorite restaurants, Puget Sound views, Pike Place Market, Space Needle, Chihuly Garden and Glass, Seattle Art Museum, and The 5th Avenue Theatre.

The first season of the Deadliest Catch we met the crew of the Northwestern at the Hiram M. Chittenden Locks when they were standing on deck waiting to pass into the ocean. Captain Sig and I have been in our new adventure for the same amount of time.

In spite of all the worrying, our family has had a great time experiencing the way city people live. We decided this way of life isn’t so bad.

The big city has now been our home for fifteen years. It takes all our energy to live, thrive, and survive surrounded by millions of people. It’s been a fun place to live, but we don’t want to retire here.

When we leave the big city we’ll take Merle Haggard‘s advice and settle down somewhere in the middle of Montana.