Sometimes I hate cancer. I’ve sought a faith attitude during my 10+ year thyroid cancer journey. But part of faith is honesty. If I only shared the victorious moments it would be fake and depress others during their trials, especially those suffering from chronic illness.

I recently had my annual round of testing, with blood work, neck ultrasound, and Dexa Scan. The artificial thyroid hormone is taking its toll. My doctor said she was happy with my blood results “since you have cancer.” WAIT! Last year I was told I didn’t have cancer. This year I do? It’s hard to determine my status since the tumors are there, but don’t give off thyroid antibodies and aren’t growing. (Surgery in 2006 and 2009 to remove tumors, surgery and RAI not an option when cancer returned in 2009.)

Levoxyl is depleting the calcium from my bones. The newest diagnosis? Osteopenia and my choice between three different medications with more horrible side-effects, like liver damage and bone cancer. It’s another faith challenge in my journey. Today I will honestly share some of the trials of having cancer. 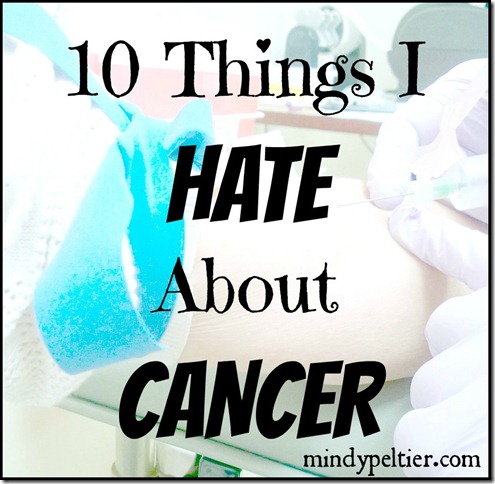 10. The Needles and the Wait

I hate needles. Always have, always will. I’ll never get used to them. The “this is just a little poke”  can be followed by a painful bruise if done incorrectly. During a four-vial blood draw at the hospital before surgery the technician held the needle at a painful 90 degree angle, a memory that still makes me squirm. It also increased my trepidation for blood draws.

But, the true agony is that the needle is retrieving an answer from your body. Whether the wait is hours, days, or weeks for the doctor to say  “yes” you have cancer or “no” you don’t, it’s agonizing. People with thyroid cancer also have to seriously watch calcium and D levels, so testing is done several times a year.

I had cancer and I’m still alive, but survivor doesn’t fit. It wasn’t a contest I won or a status I deserve, but the grace of God. But, there isn’t a good synonym and the antonym is worse, so it’s used.

We don’t face cancer because we’re brave, but because we want to live.

Who wants to be a victim? Cancer didn’t choose me, the Lord allowed it.

I like the words Mommy, Gwamma, writer, Christian, and friend.

The Bible is called a Sword and in the hands of the ignorant it damages instead of defends. To be trembling in the midst of the Refiner’s Fire and have Job’s friends accuse you of harboring a secret sin that deserves your cancer is indescribable. I learned to reject the accusation and accept their misguided concern.

When first approached by concerned Christians who felt the severity of my illness justified their boldness, I was shocked. Then hurt. Then annoyed. I remember wondering why they thought I deserved cancer and they didn’t.  I knew they were wrong, but wanted to understand the verse.

One day I wept to the Lord and begged for the answer. “WHAT?  Is my sin so secret that I don’t even know about it?”

He answered, “Yes.” Secret sin isn’t intentional harbored sin that deserves punishment, but subtle unintentional sin that is brought to light when drawn fully into the presence of the Lord through suffering.

Usually, I choose fellowship over argument with Christians who have different beliefs. When my cancer rears its ugly head, I graciously avoid those who believe cancer is a billboard displaying my lack of faith. I’ve heard often, “Have you prayed?”, “God doesn’t want you to have cancer!”, and “Don’t you believe God can heal you?”

Once I was cornered in a bathroom by a woman I barely knew who was convinced her desire to heal my cancer was greater than my own. She laid hands on me and prayed loudly and with faith. She was convinced my cancer walked out the door with her. I was thankful for her prayers and her obvious concern, but felt guilty for weeks when I wasn’t cured. I tremble for these dear believers and pray they never get cancer, it would devastate their faith. To renew my faith I read about Paul’s thorn and Christ’s crucifixion, and remind myself that if I suffer with Him I will be glorified with Him.

Show me a woman who looks older than her husband and I’ll show you a woman who probably has chronic health challenges.  You don’t just surrender your health, but your figure, skin, teeth, eye sight, hair, digestion, and sleep.

I went to Clinique for new makeup to cover some of the tell-tale signs. The consultant listened, looked at my face and said, “Oh, you’re going through cancer.”  Her sympathetic understanding and her kindness brought tears to my eyes. She didn’t deny she saw the effects and lie, “Oh you look wonderful!”  She heard my concerns and helped me find products that helped.

Do you think your schedule is busy now? Add doctor appointments.  And because cancer also affect eyes and teeth, add ophthalmologist and dentist visits.  Maybe a dermatologist. Chiropractor. Nutritionist. Naturopath. Specialists. Phlebotomist. If you’re a mom with kids, you either drag the kids along or find a babysitter. You drive, find parking, then find your car again in the concrete jungle parking garage. Cancer selfishly takes a lot of time.

Reading old magazines with recipes containing ingredients I’ve never heard of. Drinking water that bubbles from a big plastic bottle into a flimsy paper cup not because we’re not thirsty, but we’re passing time. The hard chairs. The carpeting that’s either too bland or too brightly-patterned to be a diversion. The starving artist paintings on the walls.

The people. The people waiting for needles and scans and medications and cuttings hoping to fight the enemy invaders. Especially the people sitting alone. They sit with the old magazine and the cup of water and pretend they’re not lonely.

What’s the right way to call up your Mom and tell her you have cancer?  Your siblings? Your children? The weight of their heartache adds to the pain of your diagnosis and prognosis. Their reaction is strong because they have to  face their own mortality and their inability to help if they live far away. I watched my children accept that their chances of cancer were now greatly increased. It’s been hard, but I’ve been blessed to hear the love and concern poured out from my family.

Other than being accused of sin or lack of faith, the worst answer is when people don’t say anything. They stare.  I want to raise my voice and say, “I just told you I have cancer, don’t you care? My life will never be the same!” But, I never did.The first time someone said, “I’m so sorry” I burst into tears and thanked her. She’d lost a teenage daughter the summer before and knew the pain of silence. I remind myself to answer when someone confides their troubles to me.

If people do talk, they relate their own experience with their uncle’s cancer or their next-door-neighbor’s cancer. The worst stories are when the people died from their cancer. Not quite the news you want to hear when facing your own cancer. But, it’s a way people process their own shock and pain. Read their concern between the stories.

My cancer friends have died. I haven’t. I don’t want to die, but I didn’t want them to die, either. My cancer treatment wasn’t as invasive as chemo or radiation and I’ve survived three rounds. I daily live with the side-effects and the knowledge that cancer is stalking me, but I’m alive. And I’ve outlived women that were younger than me.

I didn’t survive because I was brave or a better fighter. It’s part of the Lord’s plan and I choose to trust Him. But, guilt haunts and taunts.

Kari ~ a high school friend who died at 36 years old from brain cancer. I blogged through our story, “I Almost Killed Her Once”, “The Lord’s Plan Unfolds”, “The Beginning of the End”, “The Dreaded and Inevitable End”, and “Kari’s Smile Lives On.”

Rebecca ~ who blogged at A Cracked Pot. My husband and I worked with Rebecca at Box T Bible and Saddle Camp for a few summers.  “This is What Keeps Me Going”, “I Am Weary”, “Not Where I Thought I’d Be.”

RivkA ~ a friend I met through cancer blogging. She blogged at Coffee and Chemo. Some of her best posts  “Death Be Not Proud”, “No Droopy Eyes, Please”, and “Living is the Name of the Game.”

Two days after I received my test results, a dear friend was diagnosed with breast cancer. She’s waiting on insurance to schedule testing, but is facing chemotherapy, surgery, and radiation.

Yep, some days I hate cancer.

Ten Things I Hate about Cancer

You can also read: